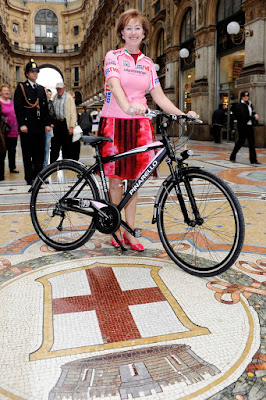 Today begins the one month countdown to the return of the finish of the Giro d'Italia to Milano, the city that more than any other in the 102 years of the race's history that has been the last act of the race. The race will finish on May 29 in an individual time trial from Piazza Castello to Piazza Duomo.

The race finish was moved to Verona last year, some 26 years after the historic 1984 edition won by Francesco Moser at the Arena in Verona, and now returns to Milano. The Giro d'Italia had finished in Milano every year since 1990 with the exception of the 100th anniversary edition in which it ended in Rome.

Milano's Mayor, Letizia Moratti (above), was on hand yesterday in the Galleria Vittorio Emanuele II wearing a maglia rosa and announcing the initiatives that will turn Milano pink over the next month.

The 94th edition of the Giro d'Italia will celebrate the 150th anniversary of the unification of Italy ("il Risorgimento"), and will start in Torino (Turin) on May 7th. Torino was the first capital of unified Italy. Torino has only once hosted a Giro start, in 1961.

Stories for the Italian Cycling Journal about rides, granfondos, having a good time cycling in Italy, Italian cycling history, etc. are always welcome. Contact me at veronaman@gmail.com. There are more than 1,900 stories in this blog. The search feature to the right works best for finding subjects in the blog. There is also a translate button at the bottom so you can translate each page.
Posted by Angelo senza la o at 7:58 AM