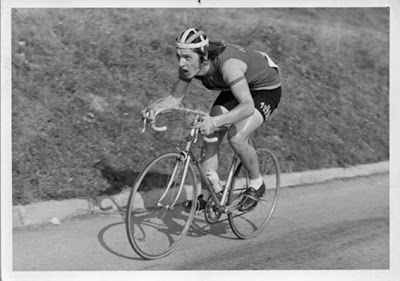 In the words of Dario Pegoretti as told to Lodovico Pignatti of Cinelli:

"When I first met Cino, he made the immediate impression, as one sometimes does, of being a man of other times. I was just a junior rider at the time, this was in around 1972, and I was riding with the Unione Sportiva Aurola Trento and I showed some amount of promise so they decided to get me a new race bike that year; a Cinelli. Back then I had a Legnano, a good bike but already, in those days, a little below a Cinelli. So Vittorio Brocaldo, the director of the association, took me by car from Trento to the old Cinelli headquarters at Via dei Folli, Milano to get fitted. 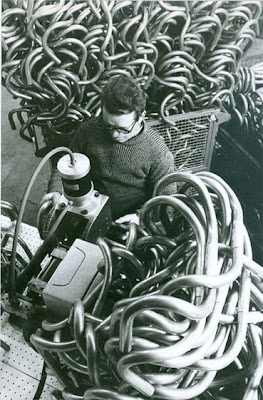 Now the first thing I remember noticing walking in was the mountains and mountains of handlebars all intertwined amongst each other; the business of course, then, being focused on handlebars, stems and saddles. Of course I was very nervous, Cino was there to take my measurements, an imposing figure, very smartly dressed, seemingly half Milanese half English gentlemen with a calm authority; nervous because at that time for cyclists going into via dei Folli was like going on a pilgrimage to see the Madonna; a Cinelli, was, in those days, the most expensive and desirable bicycle available, along with Masi, with a little behind them Colnago, who was still just beginning to come to prominence.

I remember then there was the very great rivalry between Faliero Masi and Cino Cinelli; two very different, very personal styles of building that made a very strong impression compared to other frames of the time; Cinelli you could already have described as a little old fashioned, with his classic round tubes, distinctive fast back seat-stays, three-point lugs, heraldic font and crest, while Masi more modern with his lower ovalised chain stays, pressed tube shapes and seat collar arrangement. 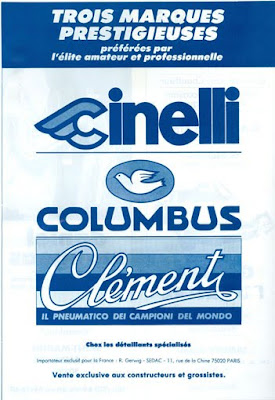 Back then you had what you called “Le Tre C” (the three Cs): Columbus, Cinelli and Clement; that was apex of professional cycling, the finest build money could buy, as well as of course the campagnolo gruppo. When my bicycle arrived, grey paint and red decals with black outlines, it was built up in this classic style, but that is not what I remember most, what I have never forgotten is the distinctive smell of the factory; the indescribable smell of some kind of special oil; my bike, when it arrived in Trento, had this same indescribable smell and to this day, for the life of me, I have never found the smell anywhere else.

A few years later, after growing a couple more centimetres, I sold my bike to a famous Italian Olympic figure skater who used to ride as training in the summers and went to see a young frame builder from my parts who was had developed a good reputation: a certain Mario Confente, still in his 20s, working in Montorio, this before he had gone to the States to build for Masi and made his legend. I had him build me a new frame in his already distinctive style, but that is a whole other story…"

Stories for the Italian Cycling Journal about rides, granfondos, having a good time cycling in Italy, Italian cycling history, etc. are always welcome. Contact me at veronaman@gmail.com. There are more than 1,800 stories in this blog. The search feature to the right works best for finding subjects in the blog. There is also a translate button at the bottom so you can translate each page.
Posted by Angelo senza la o at 7:09 AM