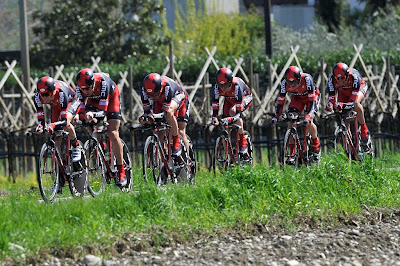 The BMC team has won the first stage of the 2012 Giro del Trentino, the 14.3 km team time trial from Riva del Garda to Arco di Trento. As the first rider from the BMC Racing Team to cross the line, Taylor Phinney (son of former professionals Davis Phinney and Connie Carpenter) donned the fuchsia jersey of race leader. In second place was the Astana train, and finishing third was a surprising Colnago CSF. Another surprise was the fourth place of Androni Venezuela. 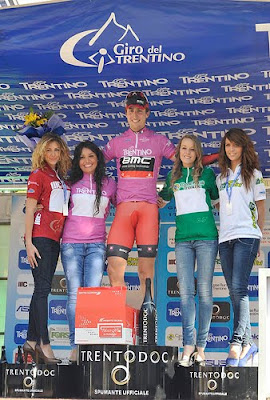 "The whole team worked well together and we were really strong," Phinney said. "There wasn't really a plan at the finish line on who would be first to finish. I just wanted to help give us the best time." The former U.S. national time trial champion, who also donned the white jersey as best young rider, said he is realistic about his chances of keeping the lead in the four-day race that features two mountain-top finishes. "The stages here are full of climbing and really difficult and I'm not exactly a climber," Phinney said. "But I'll do everything I can to help keep the jersey within the team."

The two most experienced teams, Lampre-ISD and Liquigas-Cannondale, made mistakes on the course. Lampre nicked a curve 10 km into the course which took Lloyd down and then Possoni hit him. DS Zanatta estimates it cost them 10 seconds. Liquigas' Longo Borghini broke a wheel on a road divider and the team was disjointed after that.


Acqua & Sapone were very satisfied with their 5th place result just 3 seconds from a podium finish, with Di Luca saying, "The gaps between us and those ahead of us are really small. If we accept that BMC had a great time then gaps from second to seventh place are minimal." The DS, Cenghialta, went after the stage to see the Punta Veleno ascent: "It is really impressive. I went to see it and it is very hard... with the car!! We will use 34x28 for the climb." Punta Veleno related stories:
Team Colombia Coldeportes on Punta VelenoPunta Veleno, More Difficult than Zoncolan and Mortirolo Eros Poli's First Visit to Punta Veleno

Tomorrow’s second stage is 152 km from Mori to Sant’Orsola Terme.

Stories for the Italian Cycling Journal about rides, granfondos, touring, having a good time cycling in Italy, Italian cycling history, etc. are always welcome. Contact me at veronaman@gmail.com. There are more than 2,300 stories in this blog. The search feature to the right works best for finding subjects in the blog. There is also a translate button at the bottom so you can translate each page .