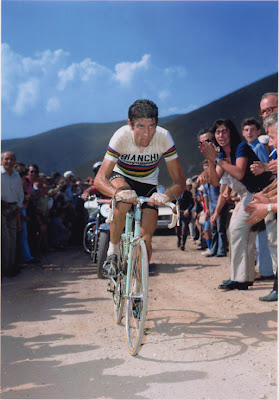 The 2012 Il Lombardia (formerly Giro di Lombardia) will be starting this year in Bergamo to honor the the 70th birthday of  bergamasco Felice Gimondi, his birthday coinciding with the race date of September 29th. The 106th edition of the race will finish again in Lecco.

The race, one of the five "monuments" of the one day classics, is also known as the "Race of the Falling Leaves" ("classica delle foglie morte") as it is normally held in October. However, this year the race has been brought forward to the weekend following the UCI Road World Championships to allow riders to directly benefit from their World Championship form.

Stories for the Italian Cycling Journal about rides, granfondos, touring, having a good time cycling in Italy, Italian cycling history, etc. are always welcome. Contact me at veronaman@gmail.com. There are more than 2,400 stories in this blog. The search feature to the right works best for finding subjects in the blog. There is also a translate button at the bottom so you can translate each page .
Posted by Angelo senza la o at 10:09 AM