Contest for "The Story of the Giro d'Italia" Book Set

Bill & Carol McGann will be providing an autographed book set, Volumes One and Two, of  "The Story of the Giro d'Italia" to the winner of this 10 question contest. The rules are simple: first 10 correct answers (which Bill has provided) receives the books. Email replies to my address below, do not leave answers in Comments. Past contest winners excluded. More information about the book set here. 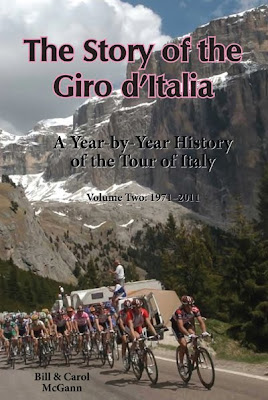 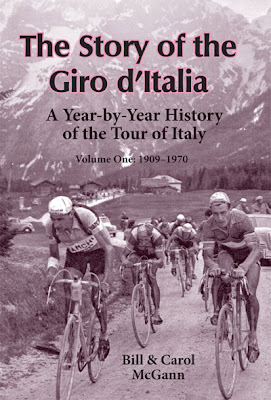 1. What is the name for the highest point in a Giro d’Italia?

2. Who holds the record for Giro participations?

4. Why was Michele Dancelli expelled from the 1973 Giro?

5. What famous bike company owner was assassinated by the Red Guards?

7. Why didn’t Giovanni Battaglin and his Inoxpran team start the 1974 Giro?

8. The controversial cancellation of what mountain pass in the 1984 Giro caused some to level accusations at the Giro organization of favoring Francesco Moser over Laurent Fignon?

10. Who broke up a fight between Francesco Moser and Giambattista Baronchelli in the 1978 Giro?

Here is a trailer Bill did for the just released Volume Two: