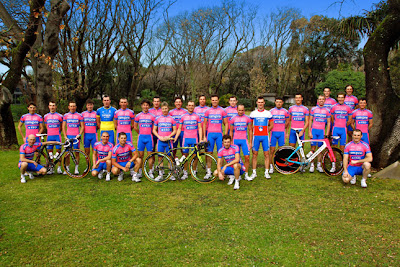 The Lampre-ISD team for the 2012 Giro d'Italia has been announced and sprinter Alessandro Petacchi is absent. It was only a few years ago that it was thought that Petaccchi might be able to break Mario Cipollini's record for most Giro d'Italia stage wins. Cipollini has 42 stage wins (he broke Alfedo Binda's record in 2003 that had stood since 1933) and Petacchi stands at 22 wins.

Michele Scarponi will be the team leader. General Manager Saronni explained the roles of Scarponi and Cunego as such, "The Corsa Rosa is a top target for Michele Scarponi: the team supports him in his choice of competing in the Giro (he had considered not riding it in order to prepare for the Tour de France) and will support Michele fully during the entire three weeks of the race in order to try to battle for the overall standing. Cunego’s presence will be very significant because Damiano will be important on the tactical side. This won’t preclude him to be free to act in some appropriate situations. All the other blue-fuchsia cyclists were chosen for the guarantees of quality they’ll assure".

The Lampre-ISD team member descriptions as provided by the team:

- Matteo Bono: born in 1983, pro since 2006, 4 victories in career. Fourth participation in Giro d’Italia. His generosity is huge as his skill in analyzing in a clear way all the race situations.

- Damiano Cunego: born in 1981, pro since 2002, 46 victories in career. Eigth participation in Giro d’Italia. The 2004 edition winner (in addition to 4 stages), this year won one stage in Giro del Trentino, obtaining also the second place in the overall standing: he approaches Giro d’Italia relying upon an increasing condition.

- Adriano Malori: born in 1988, pro since 2010, 2 victories in career. Debut in Giro d’Italia. The Italian time trial champion will be the point of reference for the team time trial in Verona and he’ll have the chance to make the assault to the time trials of Herning and Milan.

- Przemyslaw Niemiec: born in 1980, pro since 2002, 14 victories in career. Second participation in Giro d’Italia. He’s a climber that can set an irresistible pace and in 2011 he was one of the best domestiques on climbs. He trained hard in the first part of the year in order to be ready for the Giro.

- Daniele Pietropolli: born in 1980, pro since 2003, 9 victories in career. Fifth participation in Giro. Traditionally he’s very competitive in the early part of the season, but in the 2012 he showed an outstanding fit also in the Ardenne Classics. He’s very competitive on mixed courses and he’s quite fast in the sprints.

- Daniele Righi, born in 1976, pro since 2000, 2 team time trials victories in career. Fourth Giro d'Italia for him, the wisest cyclist of the team. He's very useful in order to approach every difficulties.

- Michele Scarponi, born in 1979, pro since 2002, 24 victories in career. Eight participation in Giro d’Italia. He’s the defending winner of the Corsa Rosa and he chose to accept the challenge of trying to conquer again the Giro d’Italia after that he received the 2011 title after it was stripped from Alberto Contador.

- Alessandro Spezialetti, born in 1975, pro since 1997, 1 victory in career. Fourteenth cap in Giro d’Italia. Lampre-ISD can’t renounce to the experience that Spezialetti assures to the team, in order to have a solid base for the Giro.

- Diego Ulissi, born in 1989, pro since 2010, 6 victories in career. Second participation in Giro d’Italia. As rookie in the Pink Race, he obtained immediately a stage victory. Thanks to his versatile class, he’s the surplus value of the team.