Cinelli: The Art and Design of the Bicycle 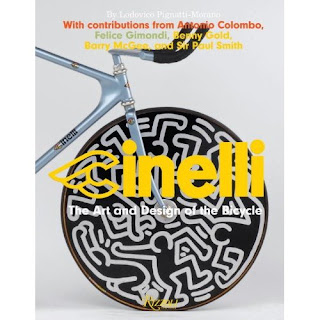 This new hardcover book of 240 pages is scheduled to be released  on October 9, 2012 and can be pre-orderd on www.amazon.com.

Book description:
"A beautifully illustrated survey of more than sixty-five years of work by one of the most pioneering and influential names in bicycle design. Since Cino Cinelli began making frames in Italy in the 1940s, Cinelli has set the standards for bicycle and component design. Cinelli has led the evolution of professional cycling and defined the ideal of the classic bicycle: from the classic Supercorsa racing frame to the cutting-edge MASH fixed-gear pursuit bikes ubiquitous on the urban riding scene; from innovations such as the first plastic racing saddles to the controversial Spinaci handlebars, banned from competition; and from timeless components, such as the Alter stem, to iconic meetings of art and design such as Keith Haring’s treatment of the hour record-setting Laser. With contributions by legendary riders such as Felice Gimondi and Gilberto Simoni, and by collaborators, from artists like Mike Giant to designers such as San Francisco’s graphic impresario Benny Gold, and featuring a conversation between fashion designer Sir Paul Smith and Cinelli president Antonio Colombo, Cinelli is the definitive look at how beauty and technology can meet in this simplest form of design."