How to Improve the Giro d'Italia? 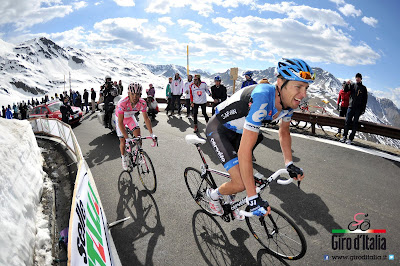 Michele Acquarone, Managing Director at RCS Sports (RCS owns the Giro d'Italia), in his most recent blog entry poses questions in six areas for improving the Giro d'Italia. Note that he says, "In the coming days, through our social media platforms, we will give space to these reflections, and we invite you to follow us and participate in the debate". The blog entry:


The more days pass, the more I am convinced that the success of the 2012 Giro d’Italia was born of the decision to build an open, transparent and continuous rapport with our stakeholders.

The channel of dialogue allows us to know and best interpret the tastes of our fans, and to understand the requirements of riders and teams alike. But this approach also obliges us to take all criticism into consideration and to learn from it so as to better our product.

Let’s try to summarize in six parts the points of reflection that the Giro has left us from a sporting point of view and which we will have to keep in mind when planning the 2013 season.

1. The route
For some, the race was open and exciting right up to the final metre of the time trial in Milan. For others, however, it was an overly-tactical race which provided few emotions. Last October 17, Harry Callaghan wrote to us: “with this ridiculous amount of ITT km you'll need a new L'Aquila or the race will be probably boring most of the time."
What do you think?

2. The climbs
When we presented the Giro, David Millar criticized the decision to insist on very demanding tapponi or queen stages. According to our own Mauro Vegni, long stages with 4 or 5 passes are the very soul of the Giro and of cycling itself because they give champions the chance to produce great exploits through memorable long breaks. Instead, for Millar, a more modern cycling should aim for shorter stages. 100 kilometers: up, down, up again. Fewer tactics and more emotion from the big riders, who give us spettacolo from the beginning to the end of the stage.
What do you think?

3. Strade bianche
According to our CEO Giacomo Catano, we should insert a nice stage of strade bianche into every Giro d’Italia. Tuscany, Umbria, the Marche and Piedmont give us many possibilities and we could discover some very evocative routes. Others don’t care for it, however, and believe that stages on dirt roads distort a grand tour.
What do you think?

4. Time bonuses
The decision not to award time bonuses in the mountain stages led to some discussion. I like the bonuses because I maintain that they add a bit of spice to the race. Should we go back to having time bonuses on all the stages or should we continue with the 2012 model of awarding bonuses only on some stages?
I’ll take the opportunity here to raise a provocative point – during the final debriefing on the Giro, our commercial director Lorenzo Giorgetti proposed allowing teams a pair of “jokers” to play during the race. Such a joker would be played by the team before the start of a stage and would double the time bonuses on offer to them in that particular stage. This decision would oblige teams to “reveal” their own race strategy before the start and would create more interest.
What do you think?

6. The sprints
On some occasions, we were criticised for having designed finales that were too technical for sprint finishes. Stefano Allocchio (who within our team represents the point of view of the rider) guarantees that the finishes of the 2012 Giro were designed to respect the security of the athletes, and he maintains that the stage finales with twists and turns ahead of the sprint are part of the history of the Giro and we shouldn’t give up on them. On the other hand, some people would like to see only long straights in the final 1000 metres so as to reduce the risk of crashes, and enjoy the power of the sprinters and their trains in full.
What do you think?

In the coming days, through our social media platforms, we will give space to these reflections, and we invite you to follow us and participate in the debate. It’s going to be interesting and some significant recommendations will certainly come out of it, which we will take into the greatest consideration.

Obviously, the invitation is open to everyone. To fans, but also to journalists, riders and insiders.

Stories for the Italian Cycling Journal about rides, granfondos, touring, having a good time cycling in Italy, Italian cycling history, etc. are always welcome. Contact me at veronaman@gmail.com. There are more than 2,500 stories in this blog. The search feature to the right works best for finding subjects in the blog. There is also a translate button at the bottom so you can translate each page .
Posted by Angelo senza la o at 10:54 AM