Book: "Road to Valor", the story of Gino Bartali 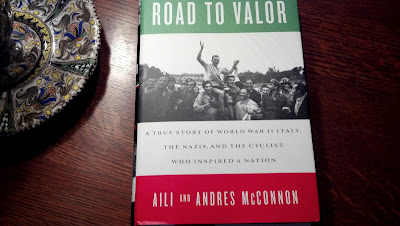 A new book arrived today at the Italian Cycling Journal, "Road to Valor" by siblings Aili and Andres McConnon is the inspiring, against-the-odds story of Gino Bartali, the chain-smoking, Chianti-loving, Italian cyclist who made the greatest comeback in Tour de France history by winning the race twice—with a gap of ten years and a World War between victories. Bartali was not simply a cycling hero but also secretly sheltered a family of Jews in an apartment he financed with his cycling winnings during World War II. With the Tour de France just around the corner, this is a wonderful opportunity to read about the unknown story of a cycling icon.

Set in Italy and France against the turbulent backdrop of an unforgiving sport and threatening politics, "Road to Valor" is the breathtaking account of one man’s unsung heroism and his resilience in the face of adversity. Based on nearly ten years of research in Italy, France, and Israel, including interviews with Bartali’s family, former teammates, a Holocaust survivor Bartali saved, and many others, Road to Valor is the first book ever written about Bartali in English and the only book written in any language to fully explore the scope of Bartali’s wartime work. Bartali used his fame in the service of true heroism: transporting counterfeit identity documents hidden in his bicycle past Fascist and Nazi checkpoints because the soldiers recognized him as a national hero in training. An epic tale of courage, comeback, and redemption, it is the untold story of one of the greatest athletes of the twentieth century.

Here is just a glimpse at the praise "Road to Valor" has garnered:

“Road to Valor is the rigorously researched account of a true champion and role model, Gino Bartali, who became stronger when faced with extreme adversity. His bicycle became the tool with which he saved countless lives during WWII and inspired a broken nation. It is a profoundly uplifting story.”
– Michael Barry, Professional Tour cyclist and New York Times contributor

“The two Tours de France won by Bartali are more than mere entries in the record book of winners. The fact that they were won many years apart proves what an exceptional champion he really was. Above all, the war years separating these victories now reveal Gino to have been a true hero.”
— Christian Prudhomme, director of the Tour de France

The book goes on sale on June 10th but can be pre-ordered now, see www.roadtovalorbook.com


A review of the book soon.