Scarponi Trains on the Stelvio for Tour de France 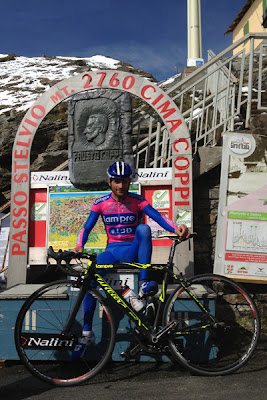 Michele Scarponi, the "L'Aquila di Filottrano" (Eagle of Filottrano), has been training on the Passo dello Stelvio for the last 10 days, rekindling an idea he has had for months: to race in the Tour de France this year.

"I'd like to take part in Tour de France," said Scarponi.

Back in December, Scarponi was considering on passing on the Giro in order to race in the Tour. He, and Lampre team manager Giuseppe Saronni, decided that he should enter the Giro. Scarponi finished 4th in GC.

Scarponi assesses his best opportunities at the Tour as being able to contest for two or three mountain stage victories. He noted that there are rest days on both Tuesdays of the last two weeks of the race, and that these are both immediately followed by two "high mountain" stages. These stages would be his targets. See the Tour de France stages here.

Team Lampre ISD will decide on the final composition of the Tour de France team just after the Italian national championships which conclude on June 24th.

Related stories about the Stelvio:
Climbing the Famous Stelvio (from Prato dello Stevio side)
Mapei Day 2009 (Stelvio from Bormio side)
Passo dello Stelvio: one of "The Magnificent Seven"
There are more Stelvio stories in ICJ, use the custom search button in the right column.