Falck Steel, The Other Italian Steel 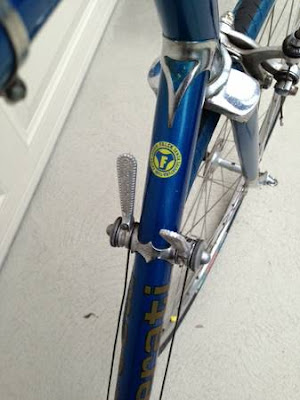 Columbus steel wasn't the only "Made in Italy" steel to be used in framebuilding. The general consensus is that Falck steel was probably used more than people realize, this is because Falck decals are rarely found on frames.

The following history appears at the Gruppo Falck website:

"As far back as 1833, Georges Henri Falck, an Alsace engineer and iron-steel specialist, was invited to manage the iron works of Dongo owned by the Rubini family.

In 1906 Giorgio Enrico Falck, Georges Henri’s grandson, established the “Società Anonima Acciaierie & Ferriere Lombarde” and shifted the entire business to Sesto San Giovanni, on the outskirts of Milan: a strategic position in view of better scrap procurement facilities, abundant water resources as well as the railway junction where coal from Germany was brought.

The Company, in the period ranging from 1906 to 1935, built a close-knit chain of new factories for steel production and was among the first in Italy to erect several hydro-electricity plants needed for its iron and steel facilities.

In the aftermath of the Second World War and availing of the Marshall Plan, Falck, now in its fourth generation of business, could launch a new cycle of growth. In 1963, the employees were a staggering 16.000 and soon came the Stock listing. In 1971, Falck was the country’s largest steel producer.

As in all countries of the developed world, the Italian iron and steel industry was plagued by a deep structural crisis lasting two decades between the 70’s and the 90’s, the result of which meant that the sector shed its strategic importance.

The Company now decided to adopt, once more, an approach which even in hindsight may be deemed both innovative and sustainable. Through Sondel, its hydro-electric subsidiary, the Group gradually moved the axis of its core business from steel to electricity and on to energy from renewable and clean sources.

Throughout the 90’s, Sondel propelled itself to the forefront of energy production in Italy by building a galaxy of natural gas fuelled combined-cycle cogeneration plants in what by now had become a strategic energy market ."