Guest contributor Buzz Yancich is back with a report about a custom cycling tour, "Ben Vivere 2009", which Eros Poli put together for his group this past September: 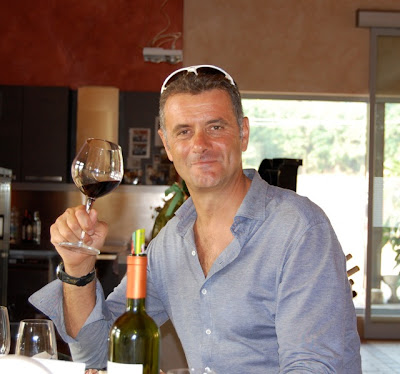 The “Eros” is Eros Poli – Italian professional cyclist from Verona.

The “Ben Vivere” is, well, Eros’ concept of the synthesis of cycling, Italian food and wine culture, history and the camaraderie of group riding.

A year ago Bob and Susan Long and myself found ourselves under the magical spell of cycling in Italy. After being wowed by Eros and later by Andy Hampsten we knew that a return trip to Italy was inevitable but this time to explore, in greater detail, the Veneto – an area of northern Italy often bypassed by cyclists seeking the bucolic setting of Tuscany or the soaring heights of the Dolomites.

After our return to the States a few emails were exchanged with Eros asking if he would be interested in setting up a trip for us. He quickly laid out an itinerary of a 10-day cycling trip in the environs of Verona, Lake Garda and Treviso (Prosecco) replete with daily wine degustations, evening appertivos and a different dinner each night all at a very fair price.

It didn’t take long to assemble 10 willing participants – in fact all of us had ridden together in Italy in 2009 with the addition of my wife, Maria.

As the drudgery of the winter months wore on we began e-mailing each other with questions about what was to come up and how would Eros handle the arrangements. Bob and I, having been fortunate to ride with Eros the summer before usually responded: “Trust Eros.“

It was clear everyone was really looking forward to this trip. We assembled in California in March for a one week training camp and with our Aperol Spritzes in hand in the warm sun and wearing our newly made “Ben Vivere” t-shirts sent Eros an e-mail photo of the group getting ready.

In turn we would all get emails from Eros every now and then saying hello and let us know what was happening, asking us how our training was going and generally keeping us primed for the trip.

Ben Vivere 2009 was scheduled for September 17 through September 27. As the dates approached, everything fell into place: work schedules cleared and last minute emergencies dealt with. Bob and Susan from Los Angeles would arrive in Verona, Andy from Seattle, Carolyn and Ken from Toronto, Corey and Susie from Alaska in Venice and Buzz and Maria from San Francisco in Florence. Except for the threat of a week of rainy weather – which fortunately never materialized , we were all set.

We all converged on Verona on September 17 and here is what happened:

The trip of a lifetime. 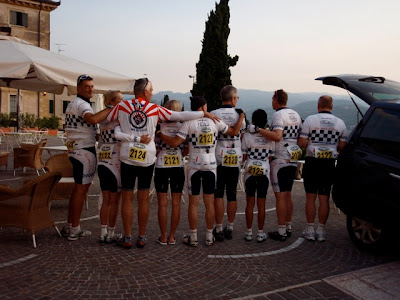 Join us over the next several weeks as we recount our adventures with Eros and give you a glimpse into what awaits the cyclist willing to commit the time and effort to travel to Italy and explore the many facets of our beloved sport of cycling.

Information on Eros' tours can be found here.

Stories for the Italian Cycling Journal welcome; contact me at veronaman@gmail.com. There are more than 1,100 stories in this blog; the search feature to the right works best for finding subjects in the blog.
Posted by Angelo senza la o at 12:50 PM