2011 Giro d'Italia: “The Toughest Race in World's Most Beautiful Place" 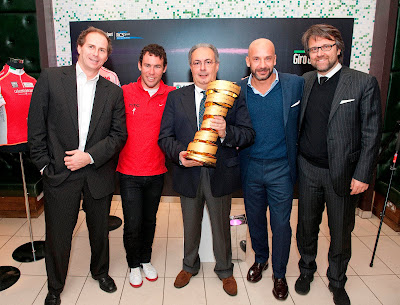 The Giro d'Italia organizers were in London today at the Bar Italia promoting the event with special guest Mark Cavendish. What they had to say:

"The Giro d’Italia is an international sporting event: a major challenge for all professional cyclists which awards, year by year, determination, courage, sacrifice and team spirit with the Maglia Rosa and the Senza Fine (never-ending) trophy.

The Giro d’Italia keeps all the magic of tradition and the flavour of Italian spirit and lifestyle. 2011 will see the 94th race since the inaugural Giro d’Italia 102 years ago. Michele Acquarone - RCS Sport Managing Director, Angelo Zomegnan – Giro d’Italia Director, Matteo Pastore - RCS Sport Media Rights & Relations Director met the international media in London today to present the most exciting aspects of “The Race of the Year 2010” according to Cycling News readers, with the stage arriving to Montalcino elected as “The Most Fascinating”.

Starting from Turin on 7th May and reaching the finish line in Milan on 29th May, spanning from Alps to Sicily and from Piedmont region in the West, to the town of Termoli facing East and the Adriatic sea, in 2011 the Giro d’Italia will make its way again through the enchanting landscape of Tuscany - chosen as elective home country by Mark Cavendish, Special Guest at the media presentation – to the rough peaks of the Dolomiti and the top of Mount Zoncolan, one of the hardest climb ever that was voted as “The Most Challenging” by Italian fans.

As evidence of the attention and enthusiasm that always gathers around the Giro d’Italia, in 2011 the Giro d’Italia has been appointed official cultural event on the 150th anniversary of Italian national unification.

This is a key role: to be testimony of a whole Country, of its history, geography, culture and friendly people all over the world. With its almost global broadcast coverage, the Giro d’Italia is a worldwide experience with an overall home reach of 350 million TV spectators throughout the world including 35 million in Italy alone, 2,065 reporters followed the race in 2010, over 1 million pages visited on the Giro d’Italia website (www.giroditalia.it) and about 10 million people that welcomed the race on the road last year.

An event that cannot be missed awaits you: let’s meet at the Giro d’Italia 2011."

Stories for the Italian Cycling Journal about rides, granfondos, having a good time cycling in Italy, Italian cycling history, etc. are always welcome. Contact me at veronaman@gmail.com. There are more than 1,700 stories in this blog. The search feature to the right works best for finding subjects in the blog. There is also an Italian weather widget along the right side and a translate button at the bottom so you can translate each page. What I'm riding.
Posted by Angelo senza la o at 7:22 PM