The Giro and the Contador Problem 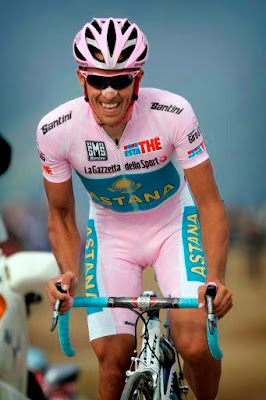 Alberto Contador, winner of the 2008 Giro d'Italia, has announced that he intends to race this year's Giro. Normally, that would be all well and good. However, this could lead to the possibility that if Contador were to win this year's Giro he could conceivably be stripped of his victory. Read on....

On Novemebr 8, 2010: The UCI requested the Spanish National Cycling Federation (RFEC) to open disciplinary proceedings against Contador on the basis of an analysis report indicating an abnormal result (presence of clenbuterol) in a urine sample taken from the Spanish rider during a test carried out on 21 July, the second rest day of the 2010 Tour de France. In accordance with the provisions of the World Anti-Doping Code applicable to the case, the UCI thus declared the provisional suspension of Alberto Contador from 24 August 2010. If necessary, the UCI and the World Anti-Doping Agency would have the option to appeal the RFEC’s decision.

January 26, 2011: It was reported that the RFEC had decided to impose a one-year ban on the 2010 Tour de France winner. Contador had 10 days to appeal the decision before the final opinion was to be issued. He consistently denied doping and defended himself by saying the Clenbuterol got into his system after ingesting contaminated beef.

February 15, 2011: The RFEC made a dramatic and surprise reversal to acquit Contador from doping charges. The ruling, although open to appeal by the UCI, allowed Contador to become immediately elligibale to begin racing. He immediately entered the Volta ao Algarve (February 16-20), finishing 4th overall. He followed that with two stages victories at the Vuelta a Murcia (March 4-6) to take the overall title.

March 24, 2011: The UCI today decided – within the time frame stipulated by the Regulations – to appeal to the Court of Arbitration for Sport (CAS) in Lausanne against the Spanish Cycling Federation’s (RFEC) finding. The decision to appeal comes after an in-depth study of the file received from the RFEC. The CAS's general secretary, Matthieu Reeb, warned of a lengthy procedure ahead. Contador is currently riding in the Volta a Catalunya (March 21-27) where he has the overall lead.

If the Court of Arbitration for Sport (CAS) decides in favor of the UCI, and if Contador receives a one year ban, all the victories back to July 21st would be stripped. As it is highly unlikely that the CAS would have a decision before the start of the Giro on May 7th it is conceivable that Contador could start, win, and have his title stripped soon afterward.

What a mess. It will be interesting to see what Angelo Zomegnan, Director of the Giro d'Italia will have to say.

Stories for the Italian Cycling Journal about rides, granfondos, having a good time cycling in Italy, Italian cycling history, etc. are always welcome. Contact me at veronaman@gmail.com. There are more than 1,800 stories in this blog. The search feature to the right works best for finding subjects in the blog. There is also a translate button at the bottom so you can translate each page.
Posted by Angelo senza la o at 4:24 PM