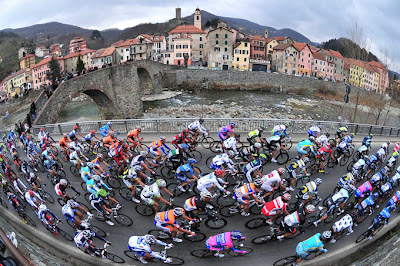 Here is what happened to some of the favorites:

Liquigas-Cannondale's Agnoli pulled away on the Le Manie, 97 km from the finish, with Nibali in tow, a move that put Cavendish into trouble and from which he was never able to recover. A dream unfullfilled: that of joining Binda, Merckx and Saronni as the only riders to have won MSR as world champion. Cavendish didn't say anything to the press after the race but his teammate Bernhard Eisel was blunt, "Mark just didn't have it today, it's as simple as that. He was going well in Tirreno but seemed to be lacking some horsepower out there today. It's a shame because he really wanted to win this and he's disappointed, for sure." 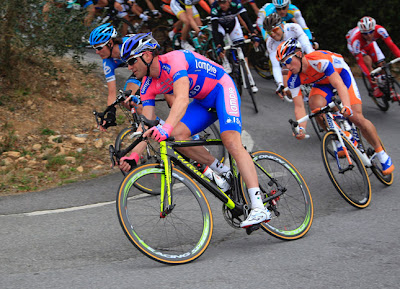 The race for Alessandro Pettachi ended on the approach to Capi when he lost the wheels of the peloton and eventually withdrew. Petacchi had started at not 100% after having pulled out of the Tirreno-Adriatico.

Philippe Gilbert, looking very well, crashed at 22 km to go and although he restarted quickly any chance for a victory was over. "It was Dominique Rollin from FDJ who was maybe on the limit and taking a lot of risks," Gilbert said. "He made a lot of riders fall around me. I was afraid because there were cars passing on my right. I slid on my back and then other riders crashed into me from behind."

Tom Boonen was a few seconds behind Cancellara, Gerrans and Nibali on the descent of the Poggio when he was caught behind a crash. "I had really good legs, maybe the best legs ever in Milano-San Remo," Boonen said. "It was always under control and the team did a really good job for me. They kept me in the first 10 to 15 positions in all important moments of the race. Then on the Poggio I was 7th or 8th when we took the corner to go downhill. I was really good, the team was with me, and we were in good position ready to fight for victory. Then, in the first part of the downhill a rider crashed, and I was just behind him. I had to brake, and lost 100 meters. Because of that it was impossible to come back."

Matthew Goss tired on the Cipressa and the Poggio where he found himself at the back of the lead group from which Gerrans and Cancellara went after Nibali's attack.

More from the winners: 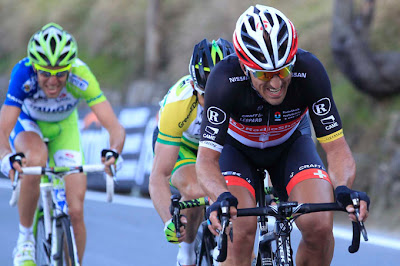 From Cancellara, who finished 2nd for the second year in a row: "I had lactic acid coming out my ears too. If you go from the top of the Poggio to the finish full on, it’s clear that at the end the gas runs out.” 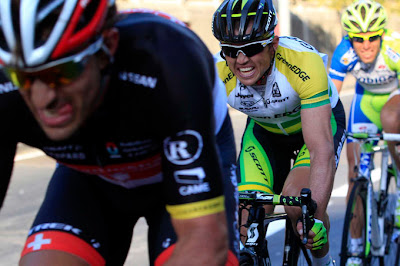 From winner Gerrans: "Without question Fabian was the strongest, I can’t deny him that. He was going like a motorbike. Really, he followed Nibali and myself on the Poggio and then he drove it across the top. He’s one of the best descenders in the peloton and he drove it down the descent. I was losing the wheel coming out of the corners each time. It’s not always the strongest guy who wins the race. You have to play a little smart and be there.”

Six more one-day classics now follow over March and April in Belgium, France and the Netherlands. Then the Giro d'Italia begins on May 5th in Herning, Denmark.

Stories for the Italian Cycling Journal about rides, granfondos, touring, having a good time cycling in Italy, Italian cycling history, etc. are always welcome. Contact me at veronaman@gmail.com. There are more than 2,300 stories in this blog. The search feature to the right works best for finding subjects in the blog. There is also a translate button at the bottom so you can translate each page
Posted by Angelo senza la o at 4:58 PM

Email ThisBlogThis!Share to TwitterShare to FacebookShare to Pinterest
Labels: 2012 Milan-Sanremo