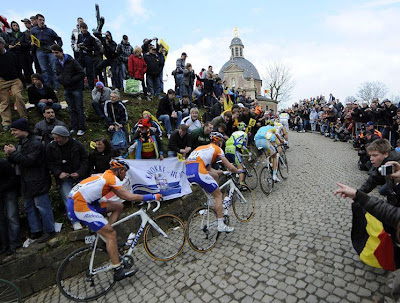 Yesterday we mentioned that the Tour of Flanders route for tomorrow has been substantially changed, leading to much controversy. The finish was changed from Meerbeke to Oudenaarde; famous hills like the Muur van Geraardsbergen and the Bosberg that have been the final two hills in almost every edition since 1975 have been removed from the course. The new final features the Oude Kwaremont and Paterberg, both will be climbed three times. Also included in the final are the infamous Koppenberg (climbed after the first passage of the Oude Kwaremont and Paterberg), the Steenbeekdries and the Kluisberg.

Some rider comments and observations:

Michele Bartoli, 1996 winner: "It’s worse than taking the Poggio from Milan-San Remo. For me, the Muur is a piece of the history of the Tour of Flanders, it’s a huge loss. I mean, if I had attacked at another place [in 1996], it wouldn’t be remembered so readily now. The Oude Kwaremont isn’t very hard, but it’s long and disjointed. It’s also a bit anomalous in that there’s a stretch of flat pavé afterwards that can hurt. The Paterberg is short but it goes up at 20%, a real wall. I couldn’t say if Flanders will be harder because it depends on the riders, but at its key points, the roads are very narrow, and technical ability will be fundamental."

Fabian Cancellara, 2010 winner: "People are scared. There’s a lot of ‘why?’ also. Why have they changed the history of this race? I guess cycling is becoming worldwide now. I mean, California is growing huge and so is the Tour Down Under, China is getting bigger. And on the other side, some of the big Italian races that I knew when I was younger are now being overshadowed. The traditions of the sport are counting for less and now on they have changed something crucial. So there is a big why. Is it just to make it harder? Is it just to make money? Is it because of politics and business? Or is it just to see more spectacular things in the race? These are the questions but I am not the organisers so I don’t know the answers."

The Belgian newspaper Het Niewsblad reported that Belgians are 3-1 against the changes. Fans have started a "we hate wouter vandenhaute" facebook page. There is a also the "Keep The Muur And Bosberg" blog.

WouterVandenhaute, the race director, has said that in order for the sport to progress, changes need to be made. He's made it clear that he wants to make cycling more attractive to sponsors — primarily to sponsors that will populate the expansive VIP tents he’s erected along the Ronde course. Vandenhaute believes it’s important to give sponsors something back, not just in terms of exposure, but also in terms of service, in terms of a “special experience.”"

Tomorrow: 257 km of pain and suffering on a new course should make for exciting watching .

Photo: the iconic Muur, for now relegated to the pages of history

Stories for the Italian Cycling Journal about rides, granfondos, touring, having a good time cycling in Italy, Italian cycling history, etc. are always welcome. Contact me at veronaman@gmail.com. There are more than 2,300 stories in this blog. The search feature to the right works best for finding subjects in the blog. There is also a translate button at the bottom so you can translate each page
Posted by Angelo senza la o at 12:46 PM

Email ThisBlogThis!Share to TwitterShare to FacebookShare to Pinterest
Labels: 2012 Tour of Flanders