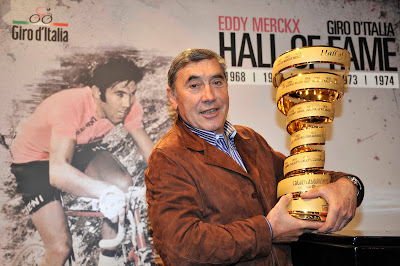 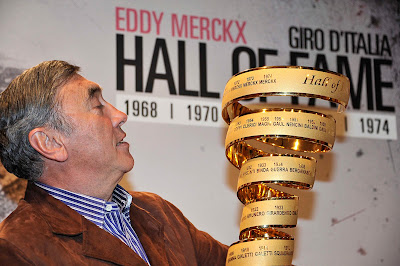 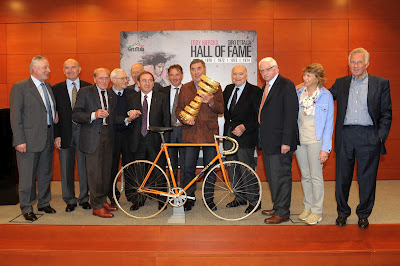 Milan, March 15, 2012 - The Belgian champion Eddy Merckx is the first rider to be inducted into the newly formed Giro d'Italia "Hall of Fame". The inauguration was held this afternoon at the Sala Montanelli in via Solferino in Milano. The Hall of Fame of the Giro d'Italia is a "first" in international cycling, designed to give tribute to the great champions who have entered into the history of the Corsa Rosa.

Eddy Merckx, the "Cannibal", was presented with the Trofeo Senza Fine (Trophy Without End) for 1974 which is when Merckx won his last of five 5 Giros.

Eddy Merckx won his first Giro at 22 years of age, in 1973 he was the pink jersey from start to finish, wore the Maglia Rosa for a total of 78 days, and he won 25 stages in total.

"To be the first to enter into this Hall of Fame is a great honor for me. Italy is my second home, here I feel as loved as I do at home in Belgium,"said Merckx. "The victory on the Tre cime di Lavaredo of the 1968 Giro was undoubtedly the day where I was strongest in the mountains in all of my career."

"Italian cycling is very important for me: I learned a lot from Adorni, my friendship with Magni took me to Italy, then I met Colnago, then De Rosa taught me how to make bicycles, with Motta I had some good battles, and my friend always....Zilioli."

The first Italian race in which Merckx took part was the 1966 Milan-Sanremo which he won. For Saturday's Milan-Sanremo Merckx obeserved, "There are so many riders in good form: Nibali, Cancellara, and Freire who could win his fourth. If Cavendish doesn't get dropped on the the Poggio I think it's really hard to beat him. Among the Belgians, I think that Boonen is the best bet, I think Gilbert is not going so well. Nibali has great qualities, however, he must learn to ride more with his head. If he's riding well I think can make a difference on the Poggio."

Stories for the Italian Cycling Journal about rides, granfondos, touring, having a good time cycling in Italy, Italian cycling history, etc. are always welcome. Contact me at veronaman@gmail.com. There are more than 2,300 stories in this blog. The search feature to the right works best for finding subjects in the blog. There is also a translate button at the bottom so you can translate each page
Posted by Angelo senza la o at 11:07 AM

Email ThisBlogThis!Share to TwitterShare to FacebookShare to Pinterest
Labels: 2012 Milan-Sanremo, Hall of Fame