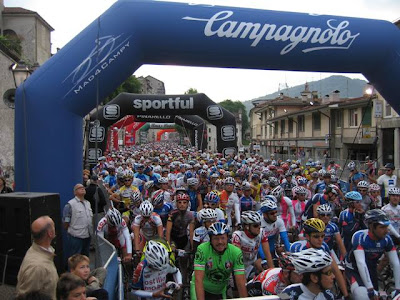 I am trying to maintain a calendar of the growing list of announced gran fondo events in the U.S.A. The following list contains today's announcement of the Echelon Gran Fondo events, an announcement from Ciclosportivo N.A. of November 10th regarding their three planned gran fondos (Boulder Vail, and Steamboat), and the newly announced Sea Otter Classic Gran Fondo (more details in a subsequent entry).

The Univest Cyclosportif (cyclosportif is the French name for the same type of race) would be the oldest event in the U.S. having already had two editions.

Photo: start of the Gran Fondo Campagnolo (2008) in Italy

Stories for the Italian Cycling Journal welcome; contact me at veronaman@gmail.com. There are more than 1,100 stories in this blog; the search feature to the right works best for finding subjects in the blog.
Posted by Angelo senza la o at 6:38 PM