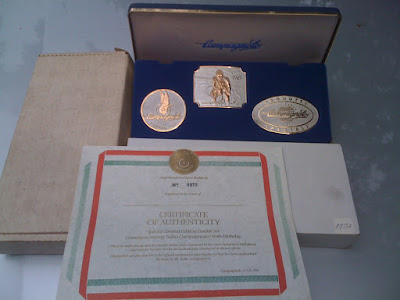 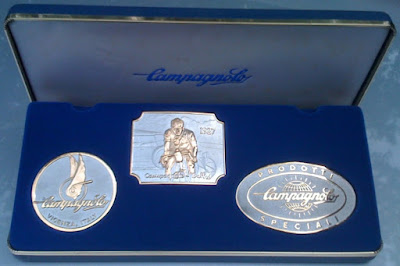 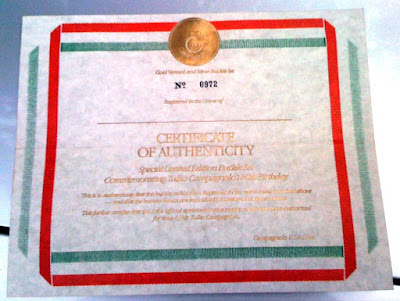 The Campagnolo "limited edition" items are interesting for Campagnolo fans. The latest was the 75th anniversary jersey of which only 75 were made. Another item not often seen as a complete set with its original box, and certificate, was a buckle set issued to celebrate Tullio Campagnolo's 80th birthday. A recently sold set was described like this:

"Most vintage bike collectors are aware of the Campagnolo 50th anniversary gruppo, of which there were 15,000 gruppi made. Many have also seen the 50th anniversary gruppo either in its fancy suitcase or on a bike. By comparison, the items that I am offering to the discerning Campagnolo collector is much less common. This is a set of three belt buckles that were produced in a limited number to celebrate Tullio Campagnolo's 80th birthday. I have been told that there were 1000 sets made and these were not openly sold. All the sets that I have seen were initially given out by Campagnolo to friends, business partners and top Campagnolo dealers. While the three buckles can obviously be used for their intended purpose of holding up your pants, they also make a perfect item for a desk or display case. The display box is indeed designed in such a way that blue insert that holds the buckles in place can be tilted up to better display them. This set comes with all the original packing material which includes the embossed blue leather display case, the certificate of authenticity, the cardboard sleeve that was designed to protect the leather display case and the outer box.

The three buckles depict the following: Tullio riding his bike over the Croce D'Aune pass at the time when he had his moment of illumination for the design of the hub quick release; the Campagnolo globe logo: and, the winged quick release logo. All of these scenes are iconic and historic Campagnolo. The belt buckles are made out of gold vermeil and silver. The set has the serial number 972."

Stories for the Italian Cycling Journal are welcomed, contact me at veronaman@gmail.com. There are more than 1,100 stories in this blog, the search feature to the right works best for finding subjects in the blog.
Posted by Angelo senza la o at 6:32 AM