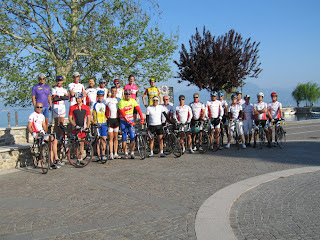 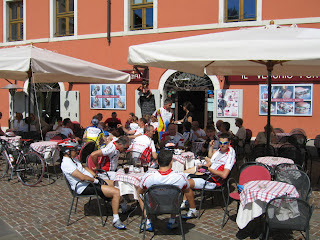 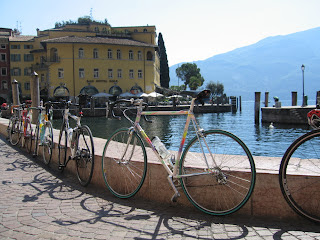 The alarm went off at 6:15 a.m. Had two peanut butter and jelly sandwiches for breakfast (old habits die hard). Packed some Special K bars in my jersey, topped off two water bottles with water (I no longer drink Gatorade and all those other strange drinks). Chose to be a retro-grouch today so decided on riding my early 1990s MALAGNINI steel, SLX, bike. I was out of the house by 7:05 and rode over to San Zeno with a backpack with a change of clothes for lunch after the ride. My ride picked me up at 7:30 and we drove to the ride start in Peschiera.

There were 24 riders from various clubs and we departed on time at 8:30ish. After about two minutes it was time to use the big chainring and it stayed there for the next 5 hours.

The weather was incredible, similar to a June day. Clear skies, bright sun, and warm temperatures (82F). From Peschiera we went north along the west side of Lake Garda, the first time I've been on that side. Two beautiful towns were Salo and Limone, will definitely have to return there to explore. Sailboarders were out in force taking advantage of the morning winds. The west side of Lake Garda also has several tunnels and it was a bit challenging cycling in them. The light situation ranged from no lights to barely lit! By 11:15 we had arrived at the northern end of the lake in Riva di Garda.


In Riva we stopped for 30 minutes at a lakeside restaurant. We soaked in some rays, had Coca-Cola, made pits stops and then we were off again.


Heading south along the east coast of the lake the wind was mostly to our backs so it was a nice "train". That also meant more paying attention to the rider in front and less sightseeing (I was surprised to see many topless women basking in the sun along the narrow stretches of beaches).


By 2:15pm were back in Peschiera; a Century+ ride in 4 hr 50 minutes of ride time. Then we had a wonderful seafood lunch before returning to Verona. A great, fun, day.


Arriving home I discovered that Paris-Roubaix was still on EUROSPORT so watched the finish. Ms. E is VERY understanding. Did you know that at the Paris-Roubaix vélodrome showers each shower cell is given name of a past winner, and after the race, riders clean up in cells named after Eddy Merckx, Rik Van Looy, Fausto Coppi or Roger De Vlaeminck?

Photos: the group at the start (me in an old Bedminster Flyers purple jersey); having a Coke in Riva di Garda; my steel "old school" (as someone said) Malagnini, a great bike
Posted by Angelo senza la o at 10:14 AM