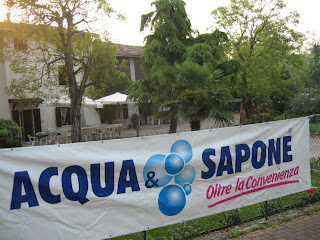 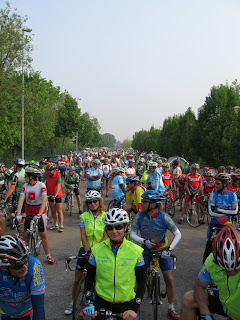 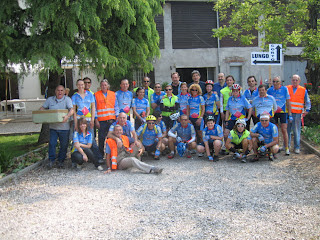 Each UDACE associated club in Verona is responsible for organizing a raduno. Today was the turn of my club, Gruppo 1.

Club members began appearing at the home of Sergio Guerra at 0715. Tables had to be set-up for registration, for the sandwiches, pasta, wine and beverages to be served, and trophies and awards. While the men were doing that the women were busy making the sandwiches and cooking.

The raduno started at 0900. The sponsoring club always gets to ride at the front of the approximately 500 riders, setting the pace. The first part of the raduno is slow and it gives all cyclists a chance to ride in the group. The "long course" split off and we increased the pace to about 35KmH for the next hour. We took a road that Napoleon used to march into Verona and did a tough little climb into Custoza. As many radunos are on flat courses this, plus the speed, put the hurt on a lot of riders.

Arriving at the finish it was time to eat, drink, chat and make the award presentations. As always, a good time was had by all.

Photos: Sergio's country home in the middle of the city; some of the awards; riders getting ready to start; Gruppo 1 poses for a photo after a successful raduno.