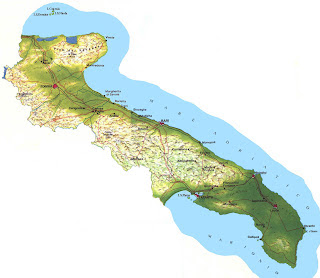 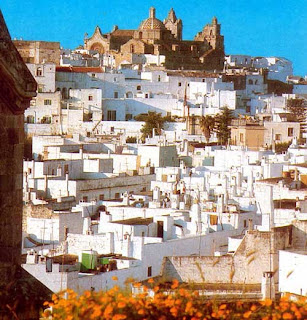 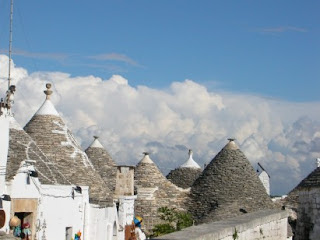 The annual one week cycling tour later this year will be to Puglia in southern Italy, the region often referred to as the "heel" of Italy. Still considered a relatively undiscovered region of Italy, visitors come to enjoy the Mediterranean weather and wholesome food.

Our cycling journey will begin in Matera. From there we will head southeast to ride the coastal road along the Golfo di Taranto. We will ride the entire coastline, reaching the southern most point at Capo Santa Maria di Leuca before turning north to ride along the Straight of Otranto. Once we reach Fasano we will turn inland and head west, back to Matera. Cycling distance will be approximately 475-500 miles.

Sometimes known as Apulia, Puglia is a land of lush olive trees, vineyards, rich brown and red soils, mild wet winters and hot dry summers, and of friendly, open people, with ready smiles.
Puglia’s history is a complex weave of colonisation, invasion and a continual struggle for independence and the Greeks, Romans, Turks, Saracens and Spanish have all laid claim to parts of Puglia through it’s history.
Puglia historically produced much of Italy’s pasta, and today it still produces over half of it's olive oil. It's rich fruity red wines, particularly those from its Salento region are also becoming popular. Lunch is something to be enjoyed and lasts from between 1pm and 4:30pm.

The architecture of Puglia is at once simple, yet stunning and the old quarters provide many insights into the different civilisations that have influenced their architecture. Roman, Greco and Messapian features are often seen side by side and Cisternino is particularly pretty. From a distance, many of the towns appear as beautiful ‘walled’ villages. Many of the houses are painted white to reflect the hot summer sun and indeed Ostuni, located between Bari and Brindisi, is also known as the ‘White City’.
Puglia is the home of the Trulli, simple yet beautiful limestone dwellings with conical roofs, many dating back to the 15th century. Highly sought after by both local residents and well to do outsiders, they have almost a fairy tale quality about them.

Puglia, like much of southern Italy, has in the past been considered a poor relation to the more northerly regions such as Tuscany. It’s cuisine, the now delightful Trulli, and even the distinctive style of furniture, known as Arte Povera, all originate from the need to make do with little material wealth. Today however, the picture is very different and the many trendy stores and boutiques tucked away inside most towns and villages attest to the growing wealth of the region.

Photos: Puglia (we will be cycling the dark green), the "heel" of Italy; white houses of Ostuni; The "Trulli" houses