Getting Ready for a Giro Around Lago di Garda 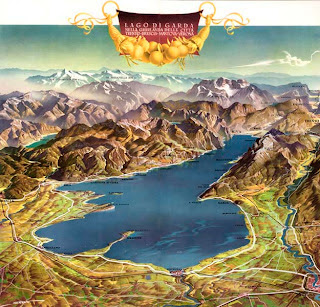 Tomorrow will be my first ride completely around Lago di Garda. A group of around 20, from various clubs, will be doing the ride led by Eros Poli. The ride will be about 105+ miles (170Km) and the high temperature is expected to be 82 F (on April 15th!!).

The ride will start at the southern part of the lake near Peschiera, head north along the west coast (belonging to the Province of Brescia), past Limone. Limone became famous in 1979 when the apolipoprotein A-1 MILANO was discovered. This protein , which is in the blood of the people born in Limone, quickly removes fat from the arteries and leads it to the liver, where it is then eliminated. This protein is efficacious against arteriosclerosis and infarct. The protein has given residents of the village extreme longevity - a dozen of those living here are over the age of 100.
Reaching the northern most point at Riva (belonging to the Province of Trento), and finally heading south along the east coast (belonging to the Province of Verona) past Malcesine, Garda, Bardolino, and back to the start.
Lake Garda has its own "lake effect" with the winds in the mornings being north to south, and reversing in the late morning. Therefore, our ride will always be into the wind. Hopefully, the winds will be light.

Today the group did a casual 2 hour early morning training ride just to spin the legs. I asked Eros what speed he was planning to ride at tomorrow and he said he plans to ride at a "leisurely" 34-35Km/k (21-22 mph). I had to remind him today that some of us are mere mortals. It is essentially a flat ride so maybe it won't be so bad. The scenery should be spectacular.