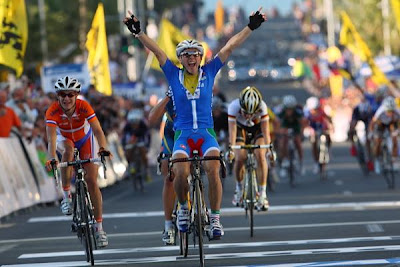 Bronzini won in a furious sprint finish catching Marianne Vos and Emma Johansson at the line. Since winning the World Championship in 2006 Vos has now finished 2nd four consecutive times.

"I still do not believe it", said Bronzini. "It's been a great team effort. All of the azzure today have sacrificed for the rainbow jersey. This is, in fact, the great value of the Italian squads and it has been proving it for years.

In the first part of the race I worked for the team, I felt good and my legs responded well. I waited for the right moment. I realized that I could and in fact I had to do the sprint in the final climb. Before it, I urged Noemi Cantele and Tatiana Guderzo to try if they were good. They, after realizing that this was my chance, have placed themselves at my disposal. They were fantastic.

This is victory for Franco Ballerini." 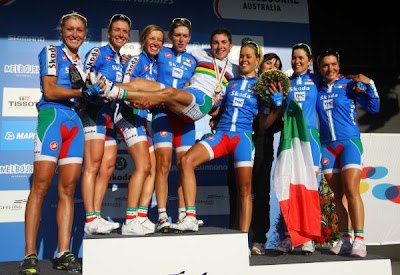 The victory was also for teammate Marina Romoli that was involved in a car accident while training and is hospitalized with serious injuries. Each member of the squad wore a glove with a single letter that spelled together "Marina Go". 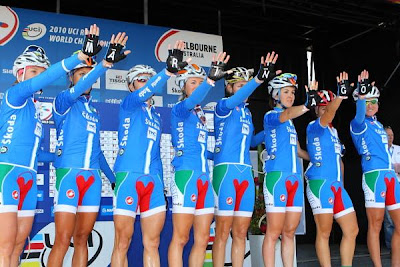 Stories for the Italian Cycling Journal about rides, granfondos, having a good time cycling in Italy, Italian cycling history, etc. are very welcome. Contact me at veronaman@gmail.com. There are more than 1,500 stories in this blog. The search feature to the right works best for finding subjects in the blog and there is also a translate button at the bottom so you can translate each page. What I'm riding.
Posted by Angelo senza la o at 2:23 PM