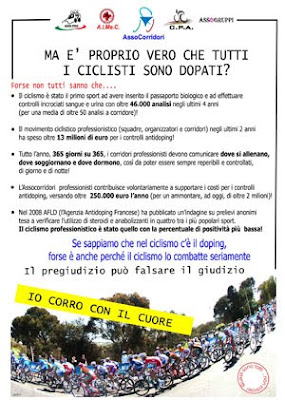 The start of tomorrow's Giro di Lombardia will be delayed 10 minutes due to a rider protest. The protest is against the recent comments of Italian Olympic Committee anti-doping prosecutor Ettore Torri in which he stated "I'm not the only one saying it. Lately, all of the cyclists I've interrogated have said that everyone dopes. The longer I’m involved in this the more I marvel at how widespread doping is."

Tomorrow the racers, and team staff, will be wearing a yellow sticker that says "Io corro con il cuore" ("I race with my heart"). The motto, chosen by those who devote their lives to cycling, cannot be misunderstood: racing with the heart means to compete with passion, with integrity and with their natural gifts.

A message (as pictured above) in a bottle will be distributed at the start, on the Madonna del Ghisallo, and finish in more than 2,000 bottles. The message discusses the efforts that cycling is making in the fight against doping:
-46,000 blood and urine controls in 4 years, plus implementation of the biological passport
-13 killion euro spent by teams, organizers and riders for antidoping controls
-365 days a year a rider must communicate where he is training, or where he is and where he sleeps
-the professional rider's association contributes 200,000 euro per year to to support anti-doping controls cost
-of the 4 most popular sports analyzed by the AFLD (France) in 2008, cycling was the sport with the least positives

Stories for the Italian Cycling Journal about rides, granfondos, having a good time cycling in Italy, Italian cycling history, etc. are very welcome. Contact me at veronaman@gmail.com. There are more than 1,500 stories in this blog. The search feature to the right works best for finding subjects in the blog and there is also a translate button at the bottom so you can translate each page. What I'm riding.
Posted by Angelo senza la o at 7:59 PM