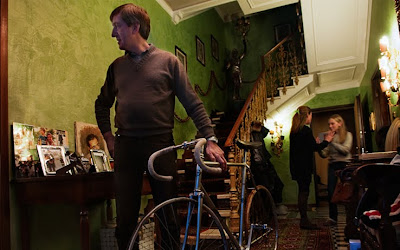 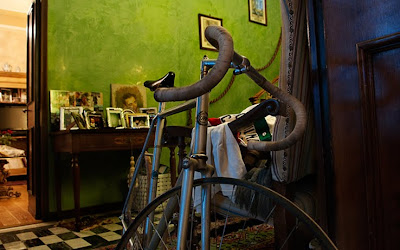 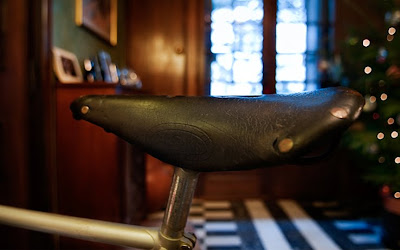 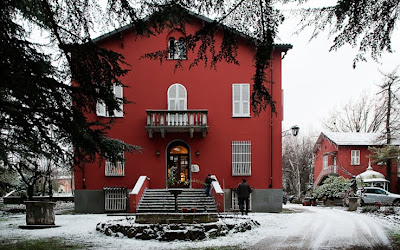 One of Fausto Coppi's track bikes is in the Coppi family home where his son Faustino (above) and family live now.

Photos by Giuliano Camarda; click on photos to enlarge

Update: some comments were left and sent directly to me as follows:

"The fork detail is Fiorelli. I'm not sure if that would date the bike a little later or not?"

"Nice photos on your great blog. However, the story of Fausto Coppi using a "Coppi"-branded bike with the typical fork crown in 1949/50 appears unlikely. During those years, he rode for Bianchi. In fact, Coppi rode for Bianchi at least until 1954. In 1956, he rode for the "Coppi-Carpano" team on bikes with that unusual fork crown. So that bike probably is almost a decade younger than claimed. Considering the the story of the bike obviously isn't correct, I wonder whether it really is a bike _ridden by Coppi_ or a _Coppi-branded bike_? "Coppi's bike" can have different meanings... The history of these purported team bikes is often hard to decipher, as we found out when we did the research for our book "The Competition Bicycle" where we included authentic, original bikes of the champions where possible (meaning after the 1930s...)
Jan Heine Editor,
Bicycle Quarterly"

"Here are two images of a real Coppi pista bike-the "Pokerissimo" owned by Giuseppe Drali. Drali has another Coppi Strada bike as well as several other important Bianchis. Hs father worked for Bianchi and bought the bikes from them." 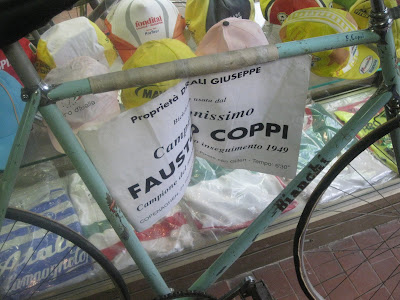 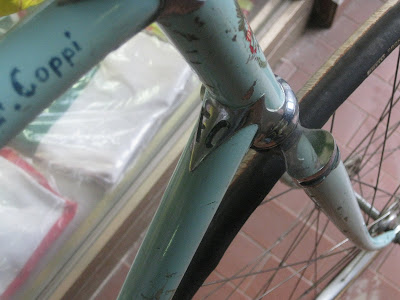 Stories for the Italian Cycling Journal about rides, granfondos, having a good time cycling in Italy, Italian cycling history, etc. are very welcome. Contact me at veronaman@gmail.com. There are more than 1,600 stories in this blog. The search feature to the right works best for finding subjects in the blog. There is also an Italian weather widget along the right side and a translate button at the bottom so you can translate each page. What I'm riding.
Posted by Angelo senza la o at 8:06 AM