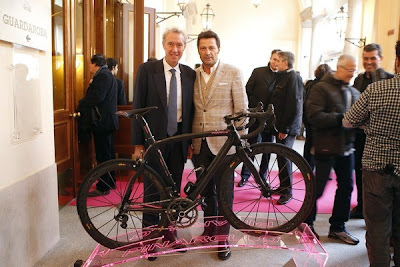 Indeed, the Pinarello bike we wrote about earlier today is equipped with a Campagnolo electronic shifting system.

More details have just been published by www.cyclingnews.com as follows:

Movistar first to use electronic gear equipped Pinarello bikes in 2011

Campagnolo has announced that the Spanish Movistar team will be the first and only professional squad to use the Italian company's new electronic gear system in 2011.

The much awaited electronic groupset was unveiled on a special black and pink Pinarello bike on show at the presentation of the 2011 Giro d'Italia. Pinarello has replaced Cervelo as the official Giro d'Italia bike for the next three years.

Movistar will use a similar bike in 2011 and will be the only team to use the electronic gear system before it goes on general sale.

At first look, the Campagnolo system seems very similar to the Shimano Di2, with wires replacing the gear cables and with the gear changes powered by a battery positioned on the down tube, below the bottle cage. However, instead of buttons to change gear, there are curved gear levers on the inside of brake hoods. The battery, levers and gears are labeled Campy Tech Lab, the name given to Campagnolo development division.

Valentino Campagnolo posed with Fausto Pinarello and the new bike but was reticent about revealing more details.

"Shimano were the first to produce an electronic system but we kept working hard on our system and now the bike unveiled is very similar to the bike that will be used by the new Movistar team," Valentino Campagnolo told Cyclingnews.

"Our system is different to Shimano's. Their one is ten-speed, while ours is 11-speed. It will also have other different aspects too but it's a little bit soon to talk about it now."

Further details are expected at the start of the 2011 season, when the Movistar team will first use their new bikes.

Stories for the Italian Cycling Journal about rides, granfondos, having a good time cycling in Italy, Italian cycling history, etc. are very welcome. Contact me at veronaman@gmail.com. There are more than 1,600 stories in this blog. The search feature to the right works best for finding subjects in the blog and there is also a translate button at the bottom so you can translate each page. What I'm riding.
Posted by Angelo senza la o at 2:20 PM