Too Big To Fail: Not 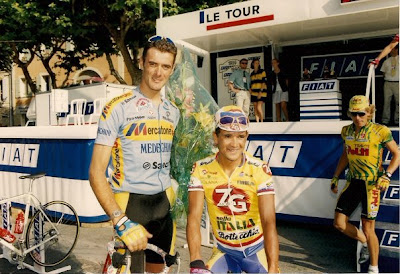 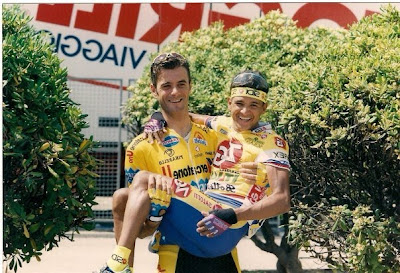 One of the most memorable cycling experiences I have had was riding up Mont Ventoux with Eros Poli. The story begins in a strange way.

One day, returning from a ride and still in my cycling kit, I stopped to buy fresh produce at the produce stand of Patrizia in Piazza Erbe (in Verona). We chatted a bit and then she told me, "Angelo, do you know that an ex-professional owns the coffee bar around the corner?".

The next day I went to the Caffe' Le Fogge and peered in the window. I could see this very, very tall man. I walked in and said, "Excuse me, I've been told that there is an ex-professional cyclist that I can find here. When would be the best time to meet him?" The man replied, "That is me.....Eros Poli". I said to myself, "This giant of a man was a professional?".

Over time, and some wine, I heard Eros' story of his unlikely and dramatic Mont Ventoux victory in the 1994 Tour de France. A story of someone that is anything but a climber. At 1.93 meters tall and 85 kilograms Poli is more of a locomotive. A locomotive that with 171 kilometers remaining in the stage escaped from the peleton and had to hold off the climbers in 107 degrees of searing heat on the slopes of Mont Ventoux.

It's a tale that I enjoy hearing Eros tell. Recently, when I had found a photo of a small climber with Eros at the Tour I shared it with him. Eros then gave me the photos you see at the top of the page. The locomotive and a climber (Cacaito Rodrigues) at the 1994 Tour de France and Giro d'Italia.

Eros, named "Monsieur Mont Ventoux" by the French press, will be at the Tour de France presentation next week. After which he will be updating his website, www.eros-poli.com, with his details of the Tour de France tours he will be offering in France in 2011. Of course, as a Verona native he offers cycling tours in Italy as well.

Do watch the Mont Ventoux video on his website which has one of the most beautiful winning gestures at the finish you will ever see.

I eventually did ride the Giant of Provence with Monsieur Mont Ventoux and it was an unforgettable experience. As were the rides on Izoard, Galibier, Alpe d'Huez and others.

For more about Mont Ventoux an article from PROCYCLING:


Now employed in a public relations role by Tour organizers ASO, the 193cm/6'3" tall Poli is the man who conquered the Giant of Provence en route to one of the most dramatic and unlikely Tour wins of all time in 1994.

These days, at the Tour, when you can’t spot see his upper torso disappearing into the clouds, you can usually find Poli sitting down with a coffee and an avid listener, reliving that scorching day in Carprentas 15 years ago.

On the eve of this Tour’s grand Ventoux finale, yesterday, Poli’s one-man audience was me. Eros confirmed that I wasn’t the first journalist to quiz him about the Ventoux this week – and I might have been about the thousandth in the past decade and a half.

“Just yesterday, I was doing features with French TV and Danish TV about it. But I still love talking about it…” he insisted.

“It” was the 15th stage of a sweltering Tour that began with Chris Boardman’s prologue win in Lille and ended with the fourth of Miguel Indurain’s Tour victories in Paris. Poli’s team leader, Mario Cipollini had suffered a horrendous crash in the Vuelta a Espana a few weeks earlier, and Mercatone Uno and Poli went to the Tour with a weakened line-up lead by Cipollini’s deputy Silvio Martinello.

“I was a passista, the guy who led out Cipollini’s sprints,” Poli explained yesterday. “Cipollini had fallen in Salamanca in the Vuelta that year, so he wasn’t doing the Tour. My captain was Martinello and we were fighting for the green jersey against Abdoujaparov. I was still leading out sprints but I also had the freedom to get into breaks.

"That day was a bit special, though. It came about almost by accident and it turned into a masterpiece. Something incredible. Unthinkable….”

Having attacked alone 100 kilometres from the foot of the Ventoux, Poli increased his lead to 25 minutes and 30 seconds by the time he reached Bédoin, the village full of charm and menace which heralds the start of the southern ascent. His advantage was huge. So was the challenge.

“I’d calculated that I needed 24 minutes at the foot of the climb, which meant a minute for every kilometre of climbing plus a little cushion to keep me ahead on the descent, then to Carpentras,” he recalled on Friday. “From the summit of the Ventoux, I’d still have 40 kilometres to ride. I was pretty confident of my maths, from all the time I used to spend in the gruppetto, figuring out how much I could afford to lose to make the time limit. When, at the top of the climb, I saw that I had four and a half minutes over [Marco] Pantani, who’d attacked behind, I knew I could do it. "

If Poli’s reconstruction sounds matter-of-fact, he was anything but when the road began lurching out of Bédoin. The first four kilometres rise at a steady four percent, but anyone who’s ridden the Ventoux knows that hell lurks behind the left hand bend which threads out of Saint-Estève and into the forest.

At that precise point, Poli’s pain gave way to fear.

“I was very afraid there," he explained. "You turn out of Saint-Estève and find yourself facing what’s basically a straight ramp of 10 kilometres, rising at 10 percent. I’ll never forget it, because it was the first time in my pro career that I’d looked down at my computer on a climb and seen that my speed was in single figures.

"On the way into the curve, I was going at 29, 30 kilometres an hour, then BAM! I looked down and it was nine, eight, nine, ten…At that moment, I said to myself that I was dead. Fortunately, after a kilometre or so, I got my breathing right, found a decent cadence and ended up climbing in exactly the same way that I usually did in the gruppetto.”

After a flawless descent, Poli would end up holding off his compatriot Alberto Elli to win by over three and a half minutes in Carpentras. He never climbed the Ventoux again in the Tour, and has returned only once since retiring in 1999. That was as a guide for a group of Scottish amateur cyclists in April this year. (ed. note: and with friends from Verona, including myself, in 2006)

“I couldn’t believe how hard it was,” he grinned on Friday. “I kept saying to myself: how the hell did I do that in ’94?

“The Ventoux is special partly because the Tour only goes there every few years, and, of course, partly because of its history,” Poli went on.“It’s (Tom) Simpson’s mountain, the mountain where (Eddy) Merckx won, where other legends have won, and I’m not one of those legends, but I have a unique status and story among them.”

Surely he does. A very tall story indeed.

Stories for the Italian Cycling Journal about rides, granfondos, having a good time cycling in Italy, Italian cycling history, etc. are very welcome. Contact me at veronaman@gmail.com. There are more than 1,500 stories in this blog. The search feature to the right works best for finding subjects in the blog and there is also a translate button at the bottom so you can translate each page. What I'm riding.
Posted by Angelo senza la o at 6:42 AM