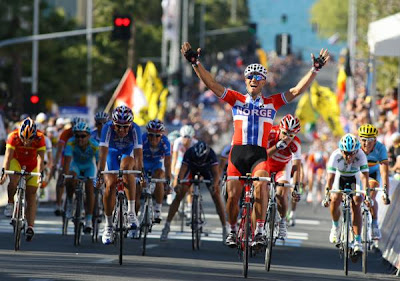 Thor Hushovd (Norway) has won the Elite Men's World Championship road race which, after 262.7 km, came down to a sprint. Hushovd launched his sprint along the left side of the barriers and had a clear lane all the way to the finish line.

"It’s hard to understand that I’ve won the Worlds. It’s a dream. I’m speechless,” said Hushovd. “There’s still one goal and that’s Paris-Roubaix. But for now I will enjoy everything and try to enjoy every day of this winter. I had this chance and maybe it will never happen again.”

It was a very exciting race in which several of the favorites appeared to have an opportunity to win. www.cyclingnews.com has a good summary of the race.

Leading up to the World's, Mario Cipollini had been outspoken about CT Paolo Bettini's decision to not select a sprinter to the Italian team. Cipollini said he would have selected Liquigas-Doimo sprinter Daniele Bennati in case the race ended in a sprint.

Bettini, who had visited Australia months ago to recon the course, believed the course wasn't suited to Bennati and responded to Cipollini's opinion by saying, “Bennati came here to do that test at his own expense, because he really wanted to go to the Worlds,” Bettini explained. “But at the Vuelta he wasn’t in super form. I could have brought him to cover my back but then I would have had to have tried to make the race neither too hard nor too easy.”

Bennati weighed in after winning the Giro della Toscana On September 26th, "The only person who didn’t see that I was flying at the Vuelta was Bettini.......I’m very disappointed not to be in Australia,” Bennati continued. “And I’d also say that the route of the Giro della Toscana had a lot in common with the Worlds course: I would have been able to make a contribution.”

So, for the foreseeable future there will be much discussion, debate and criticism in the Italian cycling press about Bettini's decision.

Pozzato said, “I’m sorry for the team because we wanted to dedicate something to Franco Ballerini, and I’m also sorry for Paolo Bettini because he believed in us to the last. But we can be proud of how we raced.”

The last lap as broadcast on SPORZA TV (non-English):

Stories for the Italian Cycling Journal about rides, granfondos, having a good time cycling in Italy, Italian cycling history, etc. are very welcome. Contact me at veronaman@gmail.com. There are more than 1,500 stories in this blog. The search feature to the right works best for finding subjects in the blog and there is also a translate button at the bottom so you can translate each page. What I'm riding.
Posted by Angelo senza la o at 2:07 PM