Vincenzo Nibali, "the shark from the strait", recently visited the SIDI headquarters in Maser (Treviso). Winner of the 2010 Vuelta a Espana, Nibali brought Dino Signori a really special gift, the red jersey from the Vuelta with one of his two Ergo 2 Carbon Lite shoes, autographed with a dedication to Sidi. 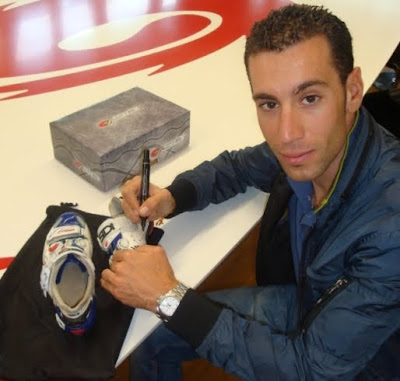 "Shoes are essential because they are a means by which the athlete is joined with his bike", explained Nibali. "It's the transmitter that expresses the force and power of the muscles to the road. I have a special relationship with my Sidi. Usually, over the course of a season, I don't use more than four pairs of shoes. It's become a tradition that about three weeks before a big stage race or goal I'm preparing for, I get a new pair of Sidi, put on the new clips and begin preparing to take on the adventure. It's almost become a good luck ritual. All the Sidi models are extremely resistant and last a long time, but in a major three week race, your shoes, like your bike and all your equipment, undergo a great deal of stress: falls, rain, dust and mud. For example, after the Giro I continued using the same Ergo 2 Carbon Lit for about three weeks before changing them. It means a lot to me to line up at the start of each new major event with my shoes in perfect shape, neat, clean and in order; that's just how I am."

As a gift Nibali was presented him with a pair of Ergo 2 Carbon Lite in the new “bronze” version. 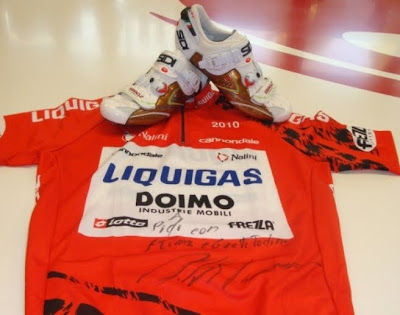 On Tuesday Nibali checked into the hospital in Lucca for the removal of a plate and screws that had been inserted after he sustained a fracture of his left collarbone at the Elenco Tour in 2009. The operation lasted two hours and was successful.

Stories for the Italian Cycling Journal about rides, granfondos, having a good time cycling in Italy, Italian cycling history, etc. are very welcome. Contact me at veronaman@gmail.com. There are more than 1,600 stories in this blog. The search feature to the right works best for finding subjects in the blog. There is also an Italian weather widget along the right side and a translate button at the bottom so you can translate each page. What I'm riding.
Posted by Angelo senza la o at 5:23 AM