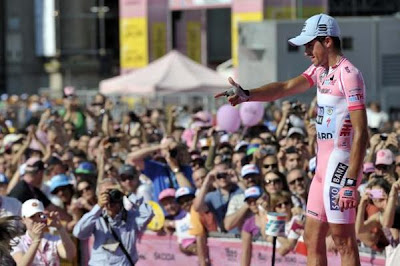 The 94th Giro d'Italia which ended Sunday, May 29, with the triumphant arrival of Alberto Contador in Piazza Duomo in Milan recorded the most widespread global coverage in the race's history.

According to estimates conducted by Eurodata TV Worldwide the 2011 Corsa Rosa has reached a potential audience of over 800 million viewers worldwide.

The Giro was broadcast live in 168 countries on five continents through the following television networks:

In Italy, the Giro this year went live on RAI 3 television, RAI Sport 1 (with repeats on RAI Sport 2) and Eurosport. The total of the live broadcast on RAI were 184 hours divided as follows: 70 hours on RAI 3 (terrestrial digital and analog), 114 hours of RAI Sport 1 (DTT). The total cumulative audience on RAI reached almost 115 million viewers.

The 95th edition Of the Giro d'Italia will start from Denmark on May 5, 2012. The official presentation will take place on October 22, 2011.

Stories for the Italian Cycling Journal about rides, granfondos, touring, having a good time cycling in Italy, Italian cycling history, etc. are always welcome. Contact me at veronaman@gmail.com. There are more than 2,000 stories in this blog. The search feature to the right works best for finding subjects in the blog. There is also a translate button at the bottom so you can translate each page.
Posted by Angelo senza la o at 5:00 AM