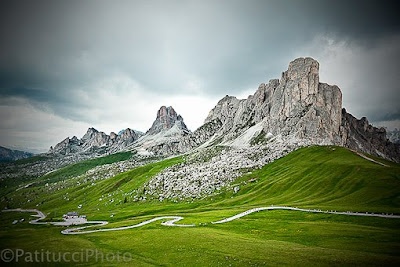 "In 2007 I did my first Maratona dles Dolomites. It was, without a doubt, one of the most rewarding days I have ever had in a competition. To stand on a Granfondo starting line with over 8000 other cyclists, at sunrise in one of the world’s most spectacular settings, with a massive day of riding ahead – and to feel the energy – is pure bliss.

Before the race I had been lucky enough to spend the six weeks leading up to the big day training in the very region – so, I was at a locals advantage of knowing the course inside and out. I had even ridden the course two times before race day. But still, I hadn’t raced it, I hadn’t pushed myself that hard yet, and I hadn’t done it with thousands of other cyclists around me.

A few friends had offered some advice, most of which I took, but one key piece I failed to act on cost me a top 100 finish. So, with this in mind, and with the Maratona fast approaching, I thought to share my thoughts on the event in the hopes that you will take something away of value. Keep in mind that after the race I had fallen so in love with the Dolomites and its rich cycling culture that I decided to call it home, I have been riding the same roads ever since 2007.

This advice is for those planning to push themselves as if it really were a race (and you’ll see, it is). For those looking to just survive, you get to simply enjoy the day, but you too must read on.

Stay in Front: This is basically impossible unless you have a starting number in the first 1000. But do your best to get by as many people as possible by the top of the second pass, the Pordoi. After the Pordoi it gets pretty tough although it does thin out. However, unless you have super climbing endurance, don’t blow up on the Sellaronda (the first loop and first 5 passes) as the Giau awaits – and it is the killer climb.

Careful on the Descents: Italians descend much closer together than Americans, it is pretty unnerving to have your leg hit someone’s handlebars at 75km/hr. Italians, being a vocal bunch, will be sure to let you know if you are screwing up. For the most part, people descend well in Europe, just relax and hold your line – practice the hairpin turns prior to racing, you’ll have the whole road on race day, use it.

The tricky sections in descent are:
Passo Pordoi: Long, fast straights into tight hairpins… just be ready for them.
Passo Sella: There is a right turn which will have flaggers standing as warning, who’s radius is longer and sharper than it looks. It is approached after a long and fast straight section after the initial turns off the Pass itself. This turn is so serious that there is an emergency medical team and helicopter on standby at the turn.
Passo Valparola: After the switchbacks on top, a long, straight section is descended at high speed. This is the approach to a tricky right turn that is sharper than it first appears, again, get to know it before race day. Though they are for motorcycles, there are grave markers in this turn for a reason.
Overall, the roads should be in great condition as many of them get re-surfaced prior to the Maratona.

Eating: This was where I made my mistake. While there are impressively stocked aid stations around the entire course, you won’t be checking in for a panino crudo if you are in race mode. But, you may want to consider it, either that or have your own pockets filled with what works for you.

After the Sellaronda there is the day’s only flattish/moderate section of road, and it is here where you must get some food down. It is the section after the descent of the Campolongo, from Arabba to Andraz and then again to the Colle Santa Lucia where there is a great aid station.

After Arabba, get some calories and salt in you for the evil Passo Giau, then let it digest enroute to the start of the climb after the Colle Santa Lucia.

Now… where I made my mistake. A good friend who does the Maratona every year warned me to be sure to eat something on top of the Giau or risk bonking on the last climb of the Falzarego.

Locally, I have heard the Giau referred to as Monkey Hill, for when you are climbing it you are sure that monkeys ran out from the forest and jumped on your back. But on race day, my friend warned me it is more like Cow Hill, you’ll feel as if you have a heifer on board. Fair enough, I would agree. It is a suffer fest.

In 2007, my data chip revealed I was in 90th position on top of the Giau, I did NOT eat, I bombed down in a small group I had cimbed with. I would pay the price, for on the last climb up to the Fazarego 44 people would pass me. There I sat, crawling up the pass with visions not of finish line glory, just pizza and pasta.

Water is found throughout and will be handed to you roadside.
Eat on top of the Giau, let it digest on descent. There is an aid station.

Temperatures/Weather: Even if the day dawns clear and warm, you should be somewhat ready for anything. When riding in the Dolomites, I almost always carry a super light rain jacket in my jersey along with a thin headband – they can save the day and weigh next to nothing. Afternoon rain showers are pretty common.

Etiquette: Do your thing, but remember the Golden Rule (Do unto others as you would have them do unto you) as there are a lot of people around.

Do not throw your trash on the road – there will be trash cans after aid stations, use them. You are not a pro so don’t act like one, it is no big deal to put your wrappers back in your jersey. In 2009 the second place overall finisher was DSQ’d for tossing trash on live TV.

Things Not to Miss in the Dolomites

The week leading up to the race is a cyclists dream. There are daily group rides to both check out the course as well as to tick other passes not in the race. Much of the fun simply comes from being around so many nationalities; Italians, Dutch, Germans, Americans, Swiss… they are all in great abundance, making friends is easy.

Passo delle Erbe (my personal favorite in all the Dolomites) loop: From Alta Badia; Climb the Passo Gardena, descend west to the autostrada, climb the Erbe, descend back to Val Badia via San Martino (100km, difficult)

Cortina d’Ampezzo and the Tre Croce Loop: Less than an hour (in a car) from Alta Badia is the famous posh village of Cortina. Sitting right amongst many of the Dolomite’s iconic peaks, it is well worth a day to explore. If you want to ride, check out the Tre Croce loop from Cortina that takes you through Misurina and the most famous of all Dolomite areas, the Tre Cime di Lavaredo. From there descend to Carbonin and then back to Cortina (about 50km, moderate).
Post ride, eat a Pizza Fantastica at Ristorante Ariston in Cortina – my vote for best pizza in all of Italy.

Walk up to the Rifugio Santa Croce above Pedraces (Badia): This is kind of a rest day activity, or something for the family – quite possibly the most peaceful, beautiful place in all the Dolomites. And good food… There is also the option of taking a lift nearly to the top from the village of Pedraces, or it is a one hour uphill (easy) walk through the beautiful forest.

People watching/bike gawking is as good as it gets. Grab a Gelato or Radler (beer and limonata) post pedal and soak in the fun sitting roadside in the village of Corvara. Better yet, do it daily in each village and decide which is best.

Note: in Alta Badia, the focal point of the race, all the famous villages where most racers stay (San Cassiano, La Villa, Corvara, Pedraces, San Leonardo) are just a few kilometers from one another, so getting around on a bike is actually about the most efficient. At some point in the week prior to the race, the area will be so thick with cyclists that being in a car is slower than walking or riding.

For more information about the area, and for guided events, visit our partners at Holimites.

For more information about the region, including hotels & guides, visit our own DolomiteSport Network." 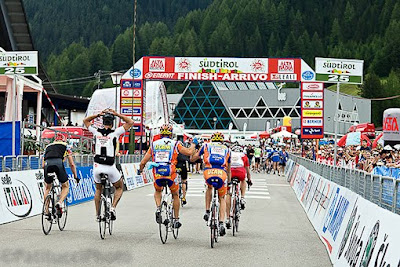 Stories for the Italian Cycling Journal about rides, granfondos, touring, having a good time cycling in Italy, Italian cycling history, etc. are always welcome. Contact me at veronaman@gmail.com. There are more than 1,900 stories in this blog. The search feature to the right works best for finding subjects in the blog. There is also a translate button at the bottom so you can translate each page.
Posted by Angelo senza la o at 9:36 AM