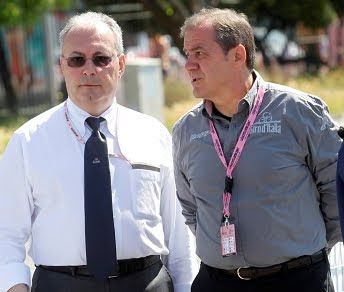 According to several Italian cycling news sources the Director of the Giro d'Italia, Angelo Zomegnan, will be leaving that position.

After a high level meeting including Director Antonello Perricone of the RCS MediaGroup, President of RCSSport Flavio Biondi, Director Michael Acquarone, and Angelo Zomegnan it appeared that Zomegnan would leave his post due to difference of views with the leaders and some mistakes during this last Giro (such as the descent of Monte Crostis which was deemed to dangerous and was eliminated from the race route due to a decision by the Panel of Commissaires; video of descent here). ).

Mentioned is the possibility that Zomegnan will have a role in the World Championships that will be coming to Florence in 2013.

His position may be filled by a pool of experts. Names mentioned: Mauro Vegni, Operations Director of the Giro d'Italia; Pier Bergonzi, journalist and author of several cycling books and editor at Gazzetta dello Sport; Silvio Martinello, gold medalist in the men's points race at the 1996 Summer Olympics in Atlanta, Georgia; Davide Cassani and Beppe Con­ti, TV cycling commentators.

Stories for the Italian Cycling Journal about rides, granfondos, touring, having a good time cycling in Italy, Italian cycling history, etc. are always welcome. Contact me at veronaman@gmail.com. There are more than 2,000 stories in this blog. The search feature to the right works best for finding subjects in the blog. There is also a translate button at the bottom so you can translate each page.
Posted by Angelo senza la o at 1:28 PM