Galibier and the "Pantani Forever" Monument 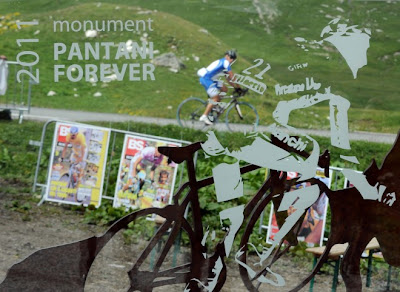 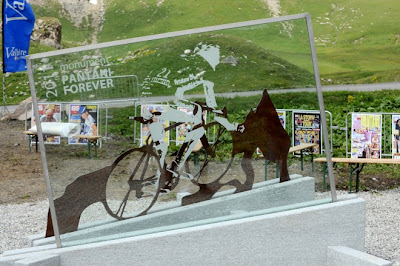 In a few days the Tour de France will start and this edition will celebrate the inclusion of the Galibier in the Tour 100 years ago. As part of the history of this mountain a new monument was inaugurated on Galibier on June 19th dedicated to Marco Pantani. It was on Galibier, on July 27, 1998, that Pantani made his ferocious attack against Jan Ullrich, then the yellow jersey, and relegated the German to nearly nine minutes in a day to pandemonium.

The "Pantani Forever" monument is located at 2,301 meters of elevation on Galibier, the point where Pantani began his attack.

The monument was created by Massimo Salvagno from stone from the Piedmonte region, from Luserna San Giovanni.

There will be a special 18.2 km ride up the Galibier to the monument on July 23rd , details here.

For this year's Tour de France the Galibier will be climbed twice after an interval of 24 hours. The finish of the 18th stage will be judged at the summit, which will be the highest finish in the Tour’s history, at an altitude of 2,645 meters. Stage 18 has three very big cols: the Agnel, the Izoard, followed by the Galibier. On Stage 19 will have Col du Télégraphe, Galibier, and then finish with the climb to Alpe d’Huez.

History of the Galibier in the Tour de France:
"The Tour’s peloton had hardly recovered from the shock of discovering the Col d’Aubisque and the Col du Tourmalet, on its trip to the Pyrenees during the 1910 Tour. And now there was talk of a new summit to be climbed, another whim resulting from the imagination of Henri Desgrange and Alphonse Steinès, the adventure enthusiasts. In 1911, the Tour de France’s peloton began its assault on the Galibier which was even higher, even harder and even colder than anything that any of the cyclists had ever experienced.

After expressing anger and hostility, the riders, who were perched between heaven and earth, were in fact fascinated by the setting and were conscious of the feat to be achieved. “It knocks you for six”, uttered proudly to spectators, émile Georget, the first rider to climb up to the summit of the Col du Galibier, at an altitude of 2, 556 metres, on 10 July 1911. The pioneer of pioneers, who did not get off his bicycle once during the entire ascent, had just completed the 34-kilometre climb, from Saint-Michel-de-Maurienne, via the Col du Télégraphe. As he was very impressed by the spectacular encounter of these heroes and was amazed by the historic day that had just been experienced by the Tour, Henri Desgrange wrote a hymn of worship for the riders in L’Auto (the daily sports paper):

“Haven’t they got wings, our men who have been able to climb up to heights where even eagles don’t fly? … Oh Sappey, Oh Laffrey, Oh Col Bayard, Oh Tourmalet! I shall not fail in my duty to proclaim to the world that you are like an insignificant and common beer compared to the Galibier: all one can do before this giant is doff one’s hat and bow.”

Out of respect for the prophecy of the Tour’s founder, cyclists have appeared before this giant for one hundred years with the same humility. Some of them have overcome it, and have even succeeded in using its steepests lopes to create a name for themselves. Gino Bartali, for example, succeeded in getting rid of the threat of Louison Bobet by dominating the Galibier, in 1948. However four years later, he suffered from the advent of the younger generation, due to the performance achieved by Fausto Coppi: “He’s like a cable-car on a steel wire rope”, said Jacques Goddet, with great enthusiasm, at the time.

Subsequently, Bahamontes, Gaul, Merckx, Zoetemelk, Ocana and Pantani have all gone over the summit first, which has moreover increased by one hundred or so metres since the tunnel was closed and the new road was built. And in 2011, a new name will become legendary, with the first finish judged at the summit of the Col du Galibier. At an altitude of 2, 645 metres, it will be the highest finish in the Tour’s history." (source www.letour.fr)Note: current record for highest summit finish in the Tour is the 2,413m Col du Granon in 1986.

Stories for the Italian Cycling Journal about rides, granfondos, touring, having a good time cycling in Italy, Italian cycling history, etc. are always welcome. Contact me at veronaman@gmail.com. There are more than 2,000 stories in this blog. The search feature to the right works best for finding subjects in the blog. There is also a translate button at the bottom so you can translate each page.
Posted by Angelo senza la o at 8:34 AM