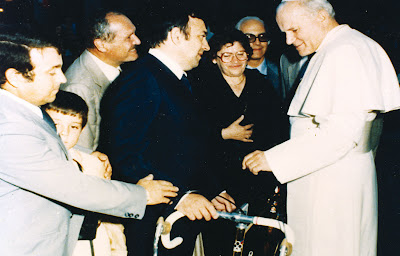 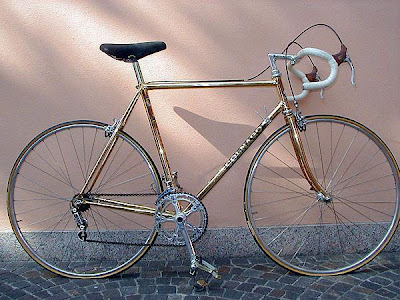 During this holiday season it is timely to mention the golden bike made by Colnago for Pope John Paul II. In the words of Ernesto Colnago, "We built this golden bike for the Pope in 1979. It was a special day when we went to the Vatican to present it to him. Very emotional for me. I went with my entire family; my brother Paolo and his son Alessandro. We heard that the Pope liked to ride a bike and that he did a ride of 38km two times a week when he was in Krakow and he continued to ride when he was in Castel Gondolfo (the Pope's summer residence outside of Rome).

The Pope picked up this bike and told me it was marvelously light and that he wished he had one like it a long time ago!

I remember that the Pope said to me that "you are in the midst of all the cyclists and the sport and I want to bless cycling and all the riders." That really touched me deeply when the Pope said that.

I don't believe that Pope John Paul II actually rode this bike so after a year or so the Vatican contacted us to give this bike back and the Pope requested a sports type bike with regular flat handlebars so we built him one, a white one. That's the bike he rode in Castel Gondolfo."

This bike is on display in the Colnago museum in Cambiago.

Stories for the Italian Cycling Journal about rides, granfondos, having a good time cycling in Italy, Italian cycling history, etc. are very welcome. Contact me at veronaman@gmail.com. There are more than 1,600 stories in this blog. The search feature to the right works best for finding subjects in the blog. There is also an Italian weather widget along the right side and a translate button at the bottom so you can translate each page. What I'm riding.
Posted by Angelo senza la o at 6:36 AM