Training for the Giro, and Not

Team Liquigas is on the island of Sardinia preparing for the 2011 season. Two time, and 2010, Giro winner Ivan Basso has already announced that he will not race in the 2011 edition opting instead to focus on the Tour de France.

Basso told the Gazzette dello Sport, "If I won the Giro d'Italia I would be on a special list of three-time winners, but the yellow jersey would give a special light to the two pink jerseys I already have at home." He does not want to use the Giro just for training, adding, "To go slowly through the Dolomites would be offending the fans."

Vicenzo Nibali ("the shark from the strait"), from Sicily, will be the Liquigas leader for the Giro. He had an incredible 2010, surprising everyone by wearing the pink jersey in the Giro and winning the Vuelta a España at 25 years of age. There is also the opportunity for Nibali to bring a Giro victory to Sicily, or to southern Italy for the first time. The most southern winner in the history of the Giro is from Abruzzo, Danilo Di Luca who won in 2007.

The competition is preparing as well, and in Nibali's backyard. Michele Scarponi will start his 2011 Giro d'Italia preparations on Thursday on Etna, the volcano that will be the field of battle for the 9th stage from Messina-Etna. 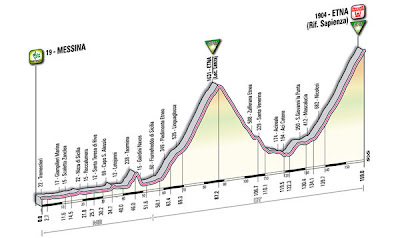 Scarponi, with the support of his new Lampre-ISD team, will focus his attention on a reconnaissance of the course. "Etna will be the second mountain top finish of the Giro so it will be an important chance for the top riders to leave their mark," Scarponi explained. "I think that it's useful to study the stage well in order to evaluate the real difficulty of it and to study the toughest parts of the climbs". Scarponi: 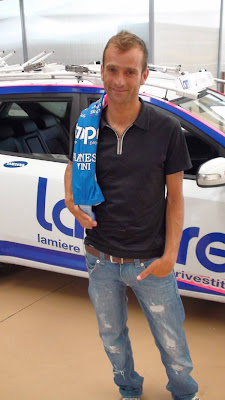 Stories for the Italian Cycling Journal about rides, granfondos, having a good time cycling in Italy, Italian cycling history, etc. are very welcome. Contact me at veronaman@gmail.com. There are more than 1,600 stories in this blog. The search feature to the right works best for finding subjects in the blog. There is also an Italian weather widget along the right side and a translate button at the bottom so you can translate each page. What I'm riding.
Posted by Angelo senza la o at 3:52 PM