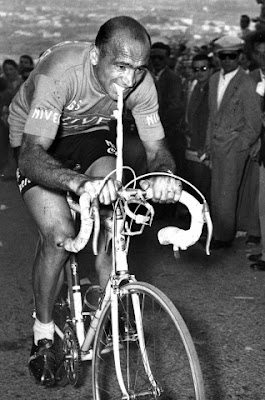 “Laugh and the world laughs with you; Weep, and you weep alone" wrote American poet Ella Wheeler Wilcox. A thought that could be used to briefly describe the philosophy of life of Fiorenzo Magni, the "Lion of Flanders", who today celebrates his 90th birthday. He will celebrate his birthday at his home in Monticello Brianza (Lecco) surrounded by the affection of his family: his beloved wife Liliana ("I married her in 1947 after only six months of courtship and now after 63 years together I still love her as the first day that we met"), the equally beloved daughters Tiziana and Beatrice, the two son-in-laws, and five wonderful grandchildren.

"In my life I have faced many difficult times but always managed to find the positive side of every situation, I have never been overwhelmed by the difficulties I encountered. To face any problem with optimism is a great lesson for everyday life and for me it was also true regarding my long sporting career." This is the first reflection of Magni, who now also tells us what it's like to feel in his nineties: "I am proud to be 90 years old in good health and my mind still bright, but sometimes it makes me feel strange to find myself in conferences which, looking around, I find to be the oldest of the participants. Unfortunately, I think about how long my life will last. All in all my life has been been very happy and rewarding, even as I set out to the next goal of 100 years years old....".

A great cycling career, from the "terzo uomo" (third man) after Coppi and Bartali, during the golden age of Italian cycling to the approximately 160 wins including 3 Giro d'Italia, 3 Tour of Flanders(which earned him his nickname), 3 Italian Championships and 3 Tour of Piedmonte. "The most beautiful victories for me were the 3rd ones in the races which I was most fond of: the Giro, Flanders, and Piedmonte and the Italian championships, 3 is the perfect number .... ". Magni's career spanned twenty years from 1936 to 1956.

An enviable result, built with persistence over many years of activity in which Magni has dueled with opponents and enemies of various types, but during which he also built strong bonds of friendship such as with the great Alfredo Martini. "We met on the occasion of my first races in 1936. In my first major placement, a 2nd place, I finished behind a race in suburbs of Florence that Alfredo won. From then arose a great mutual respect between us, a friendship that has never known friction or crisis that has lasted until today. In 1939 we were teammates in the AC Montecatini and later we found ourselves among the professionals and competed for many years. Alfredo was an unparalleled tecnico (commissario tecnico of the Italian national squad). And poor Franco Ballerini, a young man that I appreciated very much and whose early death gave me a deep pain, I thought him a a worthy heir to the leadership of the Italian national cycling professionals that I've had the honor to lead."

The story of how "Lion of Flanders" chose a career in cycling is interesting. "It was a choice in life that was almost obligatory. My father Joseph, a big, tall, man with Herculean strength had a stable of horses which transported materials of various kinds between Prato and Valle del Bisenzio, earning some good profits and assuring my mother Julia and all our family a well-off life. In the late '30s, when my father was only 47 years, he was hit by a car in Prato (which was engulfed in fog) killing him instantly. I, who had already won the championship of Tuscany for amateurs, concluded in 1937 that cycling could become a rewarding, and financially feasible, job for me. So, with great sadness we decided to sell her beloved horses and the family business."

Magni's racing debut was not too favorable, "The first race was at Incisa Valdarno in 1936 but I fell and I retired. In the second race I was suffering from a puncture, but in the the third race came the first victory. Among the amateurs I won twenty or so races and met opponents that would become friends such as the montecatinese Gino Fondi, romano Quirino Toccaceli, pistoiese Serafino Biagioni, romagnolo Vito Ortelli and, of course, Alfredo Martin."

To be continued later today.....

Translation based on a story by Stefano Fiori

Photo: 1956, Fiorenzo Magni: During the 12th stage, Grosseto-Livorno, of the Giro d'Italia Magni crashed on the Volterra descent. He broke his collarbone but finished. At the hospital he is told, "Best you return home." Magni decided to continue racing. The next day is a rest day followed by a time trail stage Livorno-Lucca, the Lucca-Bologna stage and the uphill time trial stage Bologna-San Luca. Before starting Bologna-San Luca, Magni knows that that on an ascent he cannot pull on the handlebars. His mechanic, Faliero Masi, cuts a piece of a tire tube and attaches it to the handlebar so Magni can get leverage. It works. Magni after crashing the next day and breaking his shoulder went on to finish 2nd in Milan behind Charly Gaul.

Stories for the Italian Cycling Journal about rides, granfondos, having a good time cycling in Italy, Italian cycling history, etc. are very welcome. Contact me at veronaman@gmail.com. There are more than 1,600 stories in this blog. The search feature to the right works best for finding subjects in the blog. There is also an Italian weather widget along the right side and a translate button at the bottom so you can translate each page. What I'm riding.
Posted by Angelo senza la o at 5:21 AM