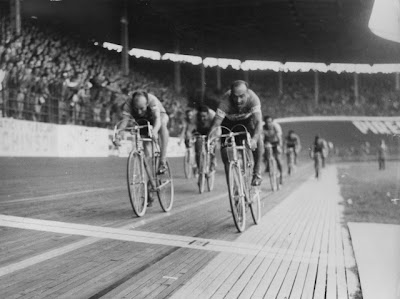 Magni shared the joy of his third and final victory in the 1955 Giro d'Italia with Alberto Martini against a hapless Gastone Nencini. With two stages remaining in the race it seemed that Nencini would be the winner of the 1955 Giro. Magni recounts, "I was not resigned to defeat and in the evening before the Trento stage (the third to last)I began to study the course at the hotel. I studied the course village by village, from Trento to San Pellegrino, and saw that there was a descent that was dangerous with a pebbled surface. It was what I was looking for and I said to myself, "Tomorrow I will escape right there!" This caused a skeptical reaction from Martini, my trusty teammate on the Nivea squad. But the next day, things went as I expected and I won the Giro there. Coppi won the stage, and I regretted having won the race against a very good young and emerging Tuscan as Nencini. Two years later, on the Leo-Diesse Chlorodont squad, I had the satisfaction of being able to contribute in good measure to the ultimate success of Nencini in the 1957 Giro.

Fiorenzo Magni is merited with having brought the sport's first, true sponsorships: "At the end of 1953 there was a major crisis caused by the arrival of the first motorcycles which threatened bicycle manufacturers such as Bianchi, Legnano and Ganna for which I competed. So, I had the intuition to try to change the regulations that at the time prevented non-sports companies from sponsoring teams and athletes. This struggle, to change the regulations, lasted three months and I benefitted from the important and unconditional support of the unforgettable President of the FCI Adriano Rodoni and great journalists such as Guido Giardini, Mario Fossati, Dante Ronchi, and others. At the same time I had successfully undertaken negotiations with the Swiss family of Zimmermann, owners of Nivea. At the beginning of 1954 Nivea entered triumphantly into cycling, marking the end of an era and the beginning of a modern view of sports sponsorship. My victorious battle, of which I am proud, also proved very useful to the sponsorship of other sports such as soccer and basketball."

Today cycling has changed further as to its relationship with the media: "I do not want to go into the fight against doping, I am displeased to encounter certain situations. In my office I keep different photographs: in one Martini and I are together in 1939 with our shirts of AC Montecatini and seem to be two young boys. The other is a reproduction of a page of Gazzetta dello Sport with a big group photo at the 1951 Giro; I am immortalized with Coppi, Koblet, Bobet, Kubler, Van Steenbergen and Bartal and Bartali. Below the photo you see a headline, written in rather small letters, which says "Al Milan lo scudetto tricolore" (the tricolor champions). Unfortunately, times have changed since then .... "

Today, Magni follows only the Giro d'Italia and the Tour de France. He expresses some opinions gladly about current riders: "I like Nibali a lot, he is a boy with a certain future, a man who will be our point of reference in stage races. But how does one go downhill so fast with a physique so thin? Obviously he has great courage. However, I also respect Ivan Basso very much."

This week the the city of Monticello Brianza has inaugurated the exhibition "I 90 anni del Leone" (the "90 years of the Lion") which will run until December 18th. The exhibition will have the two bikes on which Bartali won his two Tour de France, Coppi's hour record bike, and bikes of Merckx, Baldini and others.

Photo: 1953 Giro d'Italia: Magni wins the last stage in a sprint at the Vigorelli of Milano

Stories for the Italian Cycling Journal about rides, granfondos, having a good time cycling in Italy, Italian cycling history, etc. are very welcome. Contact me at veronaman@gmail.com. There are more than 1,600 stories in this blog. The search feature to the right works best for finding subjects in the blog. There is also an Italian weather widget along the right side and a translate button at the bottom so you can translate each page. What I'm riding.
Posted by Angelo senza la o at 2:36 PM