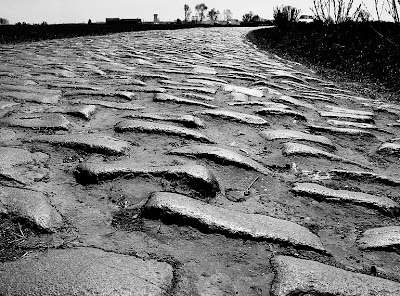 The 2013 Paris-Roubaix, 111th edition, will be held on Sunday. One of the five "monuments" of cycling it has been held since 1896. The race is also know as the "l'enfer du Nord" (Hell of the North), not because of the difficulty of the race but for the devastating effects on northern France after World War I. No one was sure if Roubaix, or the roads to Roubaix, had survived the war.

The race is regularly re-configured when the roads become useable once again, and thus the Pont-Gibus, the official name of the cobbled sector which immediately follows the crossing of the famous Trouée d’Arenberg, will feature on the route again for the first time since 2008. 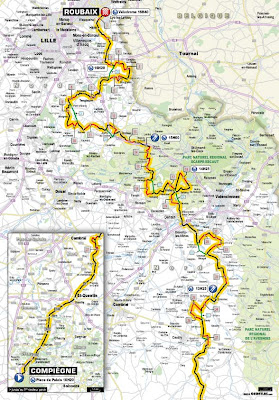 The 1949 race may be the most controversial:
"The story of Paris-Roubaix in 1949 didn't end with two winners. It went on and on for months and took two international conferences to sort out.

What happened was that there was a break of three. As ever, they came through the town and then reached the narrow roadway that leads to the ramp into the track. That's the one that you see on television, the one that comes through the tunnel. You'd think if anyone knew the way to go it would be the officials but, no, one of them managed to send the riders the wrong way. If they should have gone right, he sent them left.

Desperately, finding themselves outside the track with no obvious way to get in, André Mahe, Jacques Moujica and Frans Leenen looked for somewhere to go. Their nerves were taught and their veins full of adrenaline. To say they were jumpy would understate the case somewhat. Moujica quickly saw there was no point riding any further round the outside of the track and he turned a tight circle, lost his balance and fell off. All the troubles of getting to Roubaix were nothing compared to the last few metres because the fall broke his pedal.

Leaving Moujica to look after himself, Mahe and Leenen found not the way in they should have used but, by this time anywhere being better than nowhere, pushed at a door and found it led to the press seats. And that was how they finished Paris-Roubaix, scrambling down through the seats and the bewildered reporters before climbing over the fence to the banking, getting back on their bikes and sprinting for the line.

For the judge, Henri Boudard, that was good enough. It was unconventional, he couldn't help thinking, but Mahe had started in Paris and he had got to Roubaix and he had crossed the line before the rest. He named him the winner and sent him on his lap of honour.

It wasn't the way that Mahe would have chosen to win but in the circumstances it was sufficient and he waved to the crowds before heading off to the shower. It was then that things became still more ludicrous. A few minutes later the bunch made it into the stadium by the conventional route. Muddied and bloodied, they were led to the line by Serse Coppi, brother of Fausto." (source: www.cyclingnews.com)

Interview with André Mahé in 2007:
"C'est trop bête d'en parler (It's too stupid to talk about). There was a break. Coppi attacked. His brother Fausto gave him a push to get him away. He wanted his brother to win. I waited a bit and then I attacked and I caught him and the break. Then I went off by myself. I was going to win Paris–Roubaix. At the entrance to the vélodrome, there were crowds everywhere, blocking the way. I looked around for where to go and I was directed round the outside wall of the track, to where the team cars had to park. It wasn't like nowadays, when there's television and everything. Then it was more chaotic and the whole road was blocked. People said I should have known the way into the track. But how do you know a thing like that at the end of Paris–Roubaix, when you've raced all day over roads like that? A gendarme signalled the way to go and that's the way I went.

It was a journalist on a motorbike who managed to get up to me. He was shouting 'Not that way! Not that way!' And I turned round in the road and I rode back beneath the outside wall of the grandstand and I saw a gateway that went into the track, a gateway for journalists. And that's the way I went, except that it came out on the other side of the track from the proper entrance. The bunch came in and Serse won the sprint. But then his brother told Serse to go to the judges to object. He told Serse that I hadn't ridden the entire and precise course and that therefore I should be déclassé. But that was below him. Coppi wanted his brother to have a big victory. He was a great champion, Coppi, but to do what he did, to protest like that to get a victory for his brother, that wasn't dignified for a champion. That was below him. A champion like that should never have stooped that low. I never spoke to him about it. Never did. Why should I?"

Serse (left) and Fausto Coppi after the 1949 Paris-Roubaix: 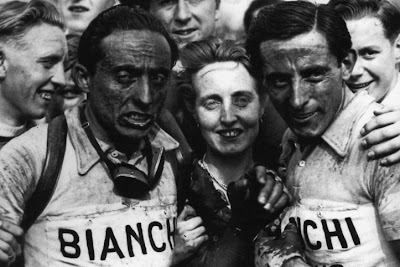 Photo: Cobbles by Jenisch Designs, www.jenisch.dk, click on all images to enlarge

Stories for the Italian Cycling Journal about rides, granfondos, touring, having a good time cycling in Italy, Italian cycling history, racing, etc. are always welcome. Contact me at veronaman@gmail.com.  There are now more than 2,800 stories in this blog. The search feature to the upper right works best for finding subjects in the blog. There is also a translate button of the page.
Posted by Angelo senza la o at 7:37 AM

Email ThisBlogThis!Share to TwitterShare to FacebookShare to Pinterest
Labels: 2013 Paris-Roubaix