"I am on the start line of the Prosecco Classic bicycle race, in the foothills of the Dolomites, in front of 1800 other cyclists. It’s just after 9am. The tape is about to be raised. The TV cameras focus on the line-up of ex-Olympic athletes, the great and the good of the cycling world – and me.

Selfishly, I want to point out to the organisers that the biplane aerobatics and piped Pavarotti is doing nothing to quell this prize bluffer’s nerves. What on earth was I doing here? And how had I managed to end up facing the wrong way? My raised foot trembled on its pedal.

Six weeks earlier, I’d been asked by a friend if I fancied accompanying an elite men’s cycling team to northern Italy. They needed an Italian-speaking dogsbody -- and they had room in their van for my bicycle. I was online, booking my plane ticket, before he’d even got to the words “cycling team”.

Keeping up with, and trying to impress boys, has always got me into trouble. Aged seven, I walked along the top of a barbed-wire fence to impress the scouts. In my teens I climbed rock faces and in my twenties I learnt to fly solo. Nothing changes: now in my early 30s, and after my first summer of road cycling, this seemed like the perfect way to start racing. Stuff time-trials on my local dual carriageway.

La Prosecco Classic takes in some of the best and arguably most scenic cycle routes in Italy (the zone formed part of the 2009 Giro d'Italia and will do again in 2011), and is split into two options: the “granfondo” of 125km and the “mediofondo” of 67km. For my first cycle race, I thought I’d play safe, and opt for the shorter route.

The day before the race, I’d sampled the area’s steep inclines and its fizz – the dry, white wine that is the race’s namesake and a notable alternative to French Champagne. On a practice run with the elite riders to Il Muro (The Wall) – a delightful incline of 25 per cent, that goes on for 1km – I’d ignored my new friend Luciano’s advice to keep on pedaling past the Prosecco promotional tent. Damn those Italians and their crazy, tactical hospitality. I took the bait and gulped down a glassful before getting back on the saddle. I also fell for a large portion of Tiramisu the evening before the race, as the elite riders from our team – Team Frezza Pasta Monte Grappa – showed the abstinence required of true athletes.

Now, swathed in fancy promotional kit, I was jammed amongst the VIPs by the starting tape, my Pinarello bicycle looking every one of its ten years -- and the only exotic language escaping my lips was muttered Anglo-Saxon.

I’d arrived late, having had to cycle 15km to get there, and found myself cycling into the line-up from the front, my bike then pointing in the wrong direction. This was not the adrenaline buzz I was after. Thankfully the starting cannon scared the bejesus out of the rest of the competitors – so at least we were on an even footing.

Out we wobbled, feet grappling for clip-in pedals, around the cobbled square of Valdobbiadene, before heading up into the vine-covered foothills. But, as I laboured my way up the 5km climb from the start, I blessed yesterday’s Tiramisu – which, appropriately, translates as “pull me up”— and the added momentum it gave me as we started on the first of many fast descents. 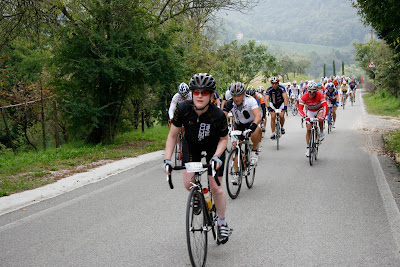 My tunnel vision cleared as the fear slipped away, and spectators at the side of the road cheered me on with “Forza le donne” and “Brava ragazza!”. Of more than 950 competitors in the mediofondo, only 70 were women -- making it even harder for me, an auburn-haired girl on a retro bike, to merge into the pack. That said, being the centre of attention now didn’t feel so bad.

Fired up by the shouts and the increasing pace, I felt strong stirrings – not of lust for the men -- but of ruthless determination. Forget ogling the cycling totty, I wanted to get past the rider in front. “A sinistra!” – or “on your left!”. “Attenzione!” – “watch out!”… crazed English girl coming through.

Two of the elite riders from our team passed me early on, and I felt a sense of pride as they sped past me and the local cycling hotshots. I urged them on, shamelessly willing them to win. At this stage, I was happy maintaining my position among the sleek Italians on equally sleek bikes, while plotting my next manoeuvre.

My fellow competitors were, in return, the epitome of gentlemanliness. The next couple of hours were marked by random acts of kindness, from the guy who put his hand on my back and urged me to stay with the peloton, to the angel – a local rider who was not even in the race – who gave me his water bottle and led me to the finish. 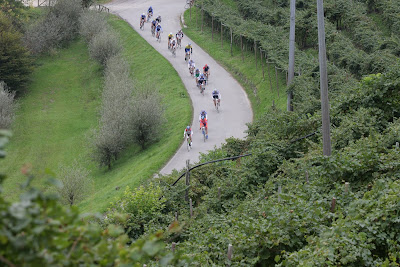 Over the last couple of kilometres, I needed all the help I could get. The gentle climb, up the straight to the line, was almost my undoing, and I feared I might not have enough fuel in the tank. “Bonking”, as cyclists call it when their limbs turn to jelly, was a distinct possibility. I stood up on my pedals, and prayed that my legs would hold.

In the town square, where earlier there had been a media circus, which had seemed dedicated to exposing me as a charlatan, now there were glitzy PR girls, handing out medals – and roses to the female riders. In England this might have seemed naff, but here it was perfection. Heck, now I wanted the biplane back, writing my name in the sky.

From the delirium of making it across the finish line, my mind began to settle and, managing not cry, I started to enjoy the sensory overload of the heaving town square.

My eyes took in the canapés, prizes and crate after crate of Prosecco, while the gentle October light worked its magic on the church tower’s sundial. While all the other racers had their fancy bike computers, that medieval timepiece was all I had to gauge my speed. Two and a quarter hours had passed -- not bad going for 67km of killer hills. I was placed 462 overall and 10th out of 70 women in the mediofondo. Amazingly, I’d hardly even noticed the men."


Fact box: The event
Anyone of reasonable fitness, with a bike, can take part in La Prosecco Classic. You should be a member of a recognized British cycling club. If you do not hold a British Cycling racing license, you can pay 5 euros for a temporary Italian racing license which insures you for the event.

Fact box: The area
The Province of Treviso, in the Veneto region of Northern Italy, is a delightfully un-touristy area between Venice and the ski resorts of the Dolomites. Its climate is ideal for growing ‘cooler’ varieties of grape, which are used to make the area’s Prosecco wine. Every inch of the foothills seems to be used for the cultivation of grapes. Pretty towns such as Vittorio Veneto and Valdobbiadene, and the villages of Follina and Cison di Valmarino hint at the area’s former prosperity.

Getting there:
Ryanair have twice-daily flights to Venice-Treviso airport from London Stansted

Share your story. Write a story about your cycling trip, or an aspect of your trip, in Italy. Or, it can be about a granfondo experience, a special encounter, your favorite ride, etc. The period for story submissions for prizes will be January 1-February 15, 2011. Prizes will be awarded on a random basis, stories will not be judged on which is the "best" one. Nevertheless, it should be a good story for the enjoyment of all readers. Photos accompanying the story are most welcome. If you have any questions email me at veronaman@gmail.com. See photos of prizes here. Prize donated by:
CycleItalia, specializing in cycling tours in Italy
BicycleGifts.com, the premiere site for gifts and merchandise for cyclists
Enzo’s ButtonHole Chamois Cream,chamois cream for the ultimate protection
FreeBirdVelo, Italian themed T-shirts
Strada Hand Built Wheels, custom wheel building
Velo-Retro, all things retro for cycling
La Gazzetta della Bici, massage oils for cyclists
Posted by Angelo senza la o at 3:58 PM