Stage IV for Javier's primarily off-road journey is a two day stage taking place in the Brenta Group and the Val di Sole. Javier begins in Don and finishes at the Refugio Lago Corvo.

The Brenta Group (Dolomiti di Brenta in Italian) is a Dolomite mountain range located in the province of Trento. The Brenta Group is the only dolomitic group west of Adige River. It is separated from the Ortler Alps in the north by the Noce valley; from the Adamello-Presanella group in the west by the Campo Carlo Magno Pass and the river Sarca; from the Fiemme Alps in the east by the Adige valley.

Like the Brenta Group, The Val di Sole (or Valle di Sole) is located in the province of Trento. The valley name of Val di Sole applies to the Val Vermiglio, the east-west aligned valley of the river Noce and its side valleys, among which the Val di Peio that heads to the Ortler. The rest of the valley from Ossana to Mostizzolo is simpy called Val di Sole. Some of the towns in the valley are Vermiglio, Peio, Dimaro, Croviana and Malè (the main town).

Javier writes of his first day of this stage, "This is one of the hardest stages of "Alpi Bike". After a comfortable start on the road, descending to Dermulo and a gentle ascent to Tuen, begins the grueling climb to the Passo del Grosté (23 km and 1810 m of ascent). First by road until the Lago di Tovel, then by trail until Malga Pozzolo. On the way to Malga Pozzolo: 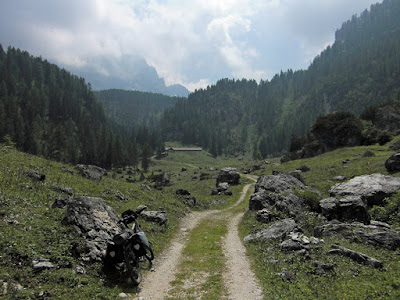 From Malga Pozzolo to the top of the Passo del Grosté required walking and pushing my bike for 6 km (which had 800m of ascent)." Near the top: 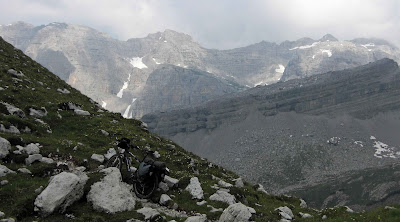 Of the second day, "A hard but tranquil day, especially after yesterday. A long descent by trail to Dimaro was great fun. Then, the descent continued by road to Male all of which made the stage easier. The main difficulties we would find at the end of the long climb to the Refugio Lago Corvo. After a few Kms of road and trail riding the last part of the trail brought renewed walking and pushing of my bike for 2.2 km, much shorter and easier than the Passo del Grosté from yesterday."

The Brenta Group as seen from the Refugio Graffer where Javier spent the night after the first day: 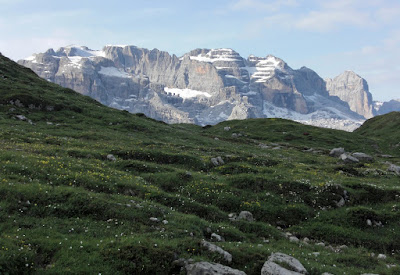 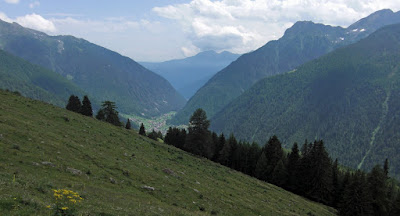 A few riders that were descending from the refugio: 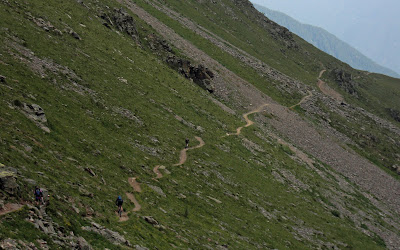 Share your story. Write a story about your cycling trip, or an aspect of your trip, in Italy. Or, it can be about a granfondo experience, a special encounter, your favorite ride, etc. The period for story submissions for prizes will be January 1-February 15, 2011. Prizes will be awarded on a random basis, stories will not be judged on which is the "best" one. Nevertheless, it should be a good story for the enjoyment of all readers. Photos accompanying the story are most welcome. If you have any questions email me at veronaman@gmail.com. See photos of prizes here. Prize donated by:
CycleItalia, specializing in cycling tours in Italy
BicycleGifts.com, the premiere site for gifts and merchandise for cyclists
Enzo’s ButtonHole Chamois Cream,chamois cream for the ultimate protection
FreeBirdVelo, Italian themed T-shirts
Strada Hand Built Wheels, custom wheel building
Velo-Retro, all things retro for cycling
La Gazzetta della Bici, massage oils for cyclists
Albabici, high-end Italian cycling products distributor
Posted by Angelo senza la o at 4:09 PM

Email ThisBlogThis!Share to TwitterShare to FacebookShare to Pinterest
Labels: Traverse of Italy