Guest contributor Steve, a member of Flavio Zappi's Cycling Club in Oxford, England, writes in with the story of his Passoni, the "la noce viola".

"The story begins in 1999 when Terry "The Trasher" turned up my house with a 97 Cannondale road bike he had just acquired . Knowing his reputation for bike destruction I told him I was buying it off him, I had £36 in my wallet and a GT mountain bike spare so we came to an agreement and it was mine. This bike went onto serve me well, many Gran Fondos, Ghisallo, Italian trips , Alpe D'Huez, Galibier Mont Ventoux, etc. 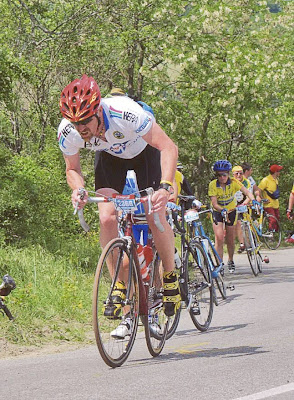 Having been a pubic servant for 30 years I decided to give myself a gift on leaving and to replace my well travelled Cannondale. So, I decided I wanted a genuine Italian titanium bike, the full monty built to last me into the twilight. My first intention was to go out to Italy, get measured then go back from England and ride it home. Well, I contacted a very well known large Italian bicycle firm who at the time was offering a Titanium made to measure bike and through a contact I spoke to the top rep. Well, to say I was nonplussed was an understatement, there were a few different components I wanted on the frame but as I didn't conform with their build options he wasn't interested so basically "up yours mate I'll spend my hard earned money elsewhere".

I contacted Passoni, a high end bicycle company near Lecco and they were more than pleased to help me with my dream. So, I got hold of my clclofriend Roops, our bikes and drove in my little van to the facility via (1 years Swiss road TAX )the Eiger and Como.

I met Danilo and after the customary espresso we got down to measuring me. Suits you sir. Well, four hours later it was completed and all the components chosen, and an agreeable price (!)was come to and a pick up date. 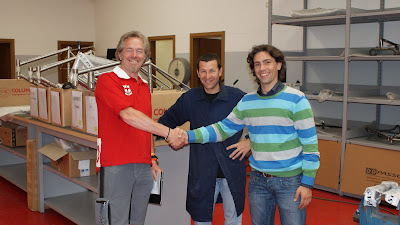 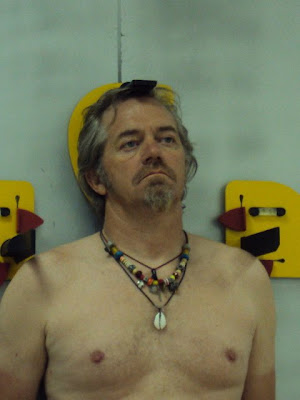 We (Roops and I) were going to see the Giro just down the road near Bergamo but after such a detailed measure up they were nearly at the finish line .. so we decided to go up to the Ghisallo.

Four months later after constant updates from Danilo on my bike's progress with various extra offers and updates the bike was finished. Bike finished, bill paid, and motor home bought because as the way of the warrior is nothing against the way of the wife...."if you think your swanning off to Italy and France for a month…….". It was off to pick up my titanium jewel and hence no ride home....

On a warm Italian September Monday morning I was welcomed into the facility, and after a cappuccino and a chat with Silvia the boss, Danilo presented me with my Passoni "Top Evolution". Well understated or what, an absolute gem, titanium, the frame workmanship was exceptional with small personal touches, black carbon and red anodised and the requested italian tricolour below the seat… well happy to say the least. After thanking Alphonso the polisher, Silva and Danlio it was off to Bellagio to meet a couple of mates who had driven down to cycle with me for a few days. 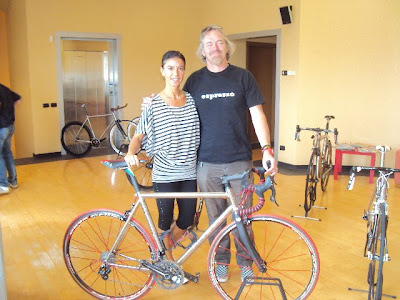 Up to the Caffe Bar Sport to have a quick espresso with Augusto the owner it was up to the Ghisallo for a christening, then back to change and to the Sports Bar for beer, pizza and grappa. 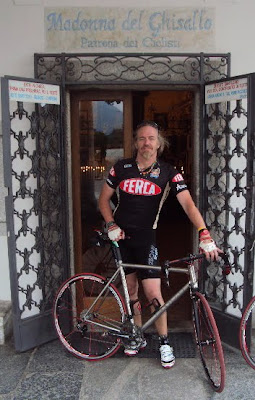 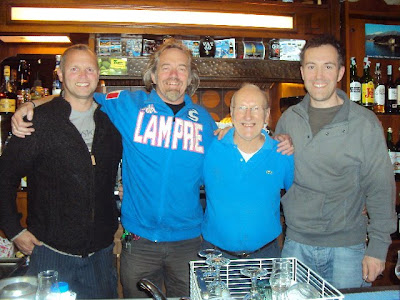 Farewells said it was off next day to show Fausto my new bike. So, down to Coppi's house at Castellania and last resting place (very moving). 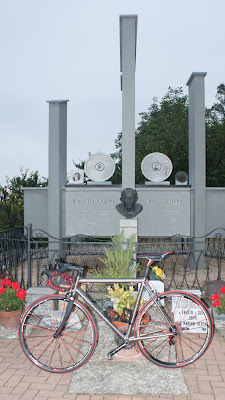 After saying my respects, pasta and cheese in the motor home it was off to Bourg to take my new steed up the Alpe its where the legend of "The Purple Walnut" was written. Briefly back in 2000, Wiz (who came over to ride ) and I were attempting our first ascent of the Alpe D'Huez, when in all our finery and ego we were passed at speed by a old wrinkled french guy in purple lycra with a friendly 'Bonjour' and he passed and continue up the Alpe effortless leaving us flabbergasted. I said that when I "retire" I want to be like him and that's that's why I had "la noce viola" bead blasted on the top tube. 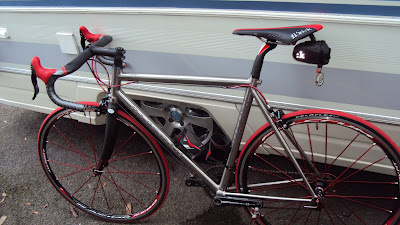 Mission accomplished. The Passoni gets better every ride and makes you want to go out. Happy man....Oh yes...

Thanks to Danilo and all at Passoni, the boss of Ferca (Como ) for the team kit and the very understanding Memsahib.

Occasional updates go onto my Blog…http://empidog-empidog.blogspot.com/"

Share your story. Write a story about your cycling trip, or an aspect of your trip, in Italy. Or, it can be about a granfondo experience, a special encounter, your favorite ride, etc. The period for story submissions for prizes will be January 1-February 15, 2011. Prizes will be awarded on a random basis, stories will not be judged on which is the "best" one. Nevertheless, it should be a good story for the enjoyment of all readers. Photos accompanying the story are most welcome. If you have any questions email me at veronaman@gmail.com. See photos of prizes here. Prize donated by:
CycleItalia, specializing in cycling tours in Italy
BicycleGifts.com, the premiere site for gifts and merchandise for cyclists
Enzo’s ButtonHole Chamois Cream,chamois cream for the ultimate protection
FreeBirdVelo, Italian themed T-shirts
Strada Hand Built Wheels, custom wheel building
Velo-Retro, all things retro for cycling
La Gazzetta della Bici, massage oils for cyclists
Posted by Angelo senza la o at 6:58 AM

Email ThisBlogThis!Share to TwitterShare to FacebookShare to Pinterest
Labels: Passoni