"Marche in Bici" 2011: Personal Performance Based 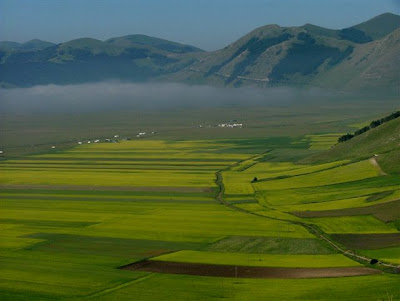 The Marche region is located in the central area of the country, bordering Emilia-Romagna and the Republic of San Marino to the north, Tuscany to the north-west, Umbria to the west, Abruzzo and Lazio to the south and the Adriatic Sea to the east. Some of the most enjoyable, and beautiful, riding I've done in Italy has be in Marche.

Which brings me to the "Marche in Bici" granfondo circuit that is being organized for 2011. As part of this the organizers are introducing a revolutionary concept: the "Performance Personale" (Personal Performance) category. The organizers explain it as such:

"The goal is to move cyclists towards finding the true love of cycling that is above all a challenge to oneself, and not the exaggerated competition we are witnessing today.

The Gran Fondo event, over time, has increasingly taken on an elitist dimension. Increasingly, attention has been given to the order of arrival and the riders (always the same) who are fighting to win. For real amateurs a victory is more and more unattainable. They are relegated to a mere outline of the event story, a number to be shown in the final report.

The Marche in Bici circuit hopes to rediscover the adventurous spirit that animated the first gran fondo events when the challenge for those that rode was, first, with oneself. It is in this spirit that Marche in Bici has decided to revolutionize the concept of ranking in a Gran Fondo by designing a new ranking system that in a few years will prevail on the order of arrival: the "Performance Personale". A classification designed to reward the rider who will be more improved than the previous year. The winner will be decided based on who was stronger against himself.

Theerfore, in the future there will be two classifications in each of the medio (medium) and lungo (long) results. The "Performance Personale" victors will receive the same prominence as those in the order of arrival classification.

The idea is to give prominence to the human spirit, to the challenge that every cyclist undertakes against himself."

The gran fondo events that make up the Marche in Bici circuit are:

For information about the Marche in Bici circuito visit www.marcheinbici.org 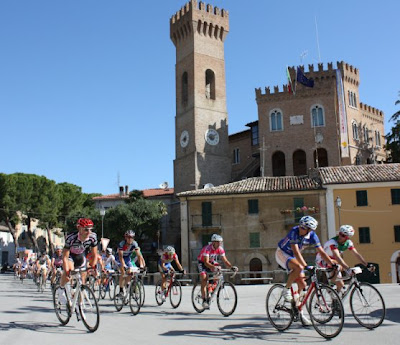 Note: my translation of the organizer's announcement was not word for word but it does capture the sentiment of the goal that is trying to be achieved. These changes, and those of the La Pinarello (see Direction Change for Granfondo Events?), reflect a growing sense that gran fondo events have steered too far from their origins.

Share your story. Write a story about your cycling trip, or an aspect of your trip, in Italy. Or, it can be about a granfondo experience, a special encounter, your favorite ride, etc. The period for story submissions for prizes will be January 1-February 15, 2011. Prizes will be awarded on a random basis, stories will not be judged on which is the "best" one. Nevertheless, it should be a good story for the enjoyment of all readers. Photos accompanying the story are most welcome. If you have any questions email me at veronaman@gmail.com. See photos of prizes here. Prize donated by:
CycleItalia, specializing in cycling tours in Italy
BicycleGifts.com, the premiere site for gifts and merchandise for cyclists
Enzo’s ButtonHole Chamois Cream,chamois cream for the ultimate protection
FreeBirdVelo, Italian themed T-shirts
Strada Hand Built Wheels, custom wheel building
Velo-Retro, all things retro for cycling
La Gazzetta della Bici, massage oils for cyclists
Albabici, high-end Italian cycling products distributor
Posted by Angelo senza la o at 4:16 PM

Email ThisBlogThis!Share to TwitterShare to FacebookShare to Pinterest
Labels: Marche in Bici