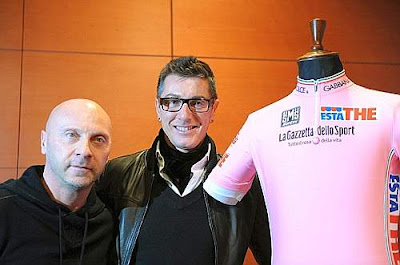 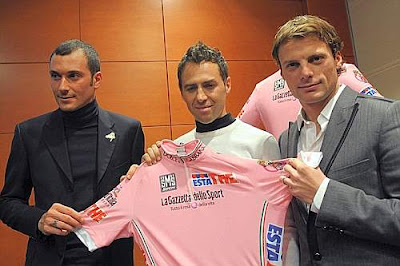 Dolce & Gabbana unveiled their "Centenario" Giro jersey design today in Milan. Dolce and Gabbana at the unveiling; Basso, Simoni and Di Luca hold the jersey they hope to win.
"Armstrong's story is fantastic," comments Gabbana. "After having beat cancer, he now races against time; that has to give anyone an amazing amount of motivation. I admit that I would like to see him wearing our pink jersey." Dolce's opinion of the symbolism of the pink jersey was almost metaphysical: "It's really unique because usually, when someone wins a sporting event, they receive a trophy. With a trophy, you take it, you lift it up, you pose for the photo and that's it. However, the pink jersey is different; you wear it; it has the sweat you spent winning it or defending it; and once you do it, it's something original, something completely yours."
Posted by Angelo senza la o at 5:13 PM