Season's Greetings from the Confente Family 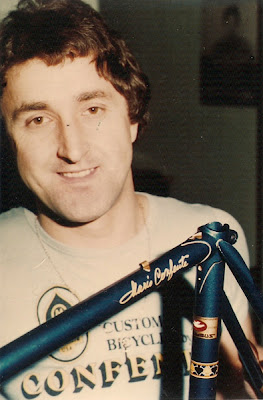 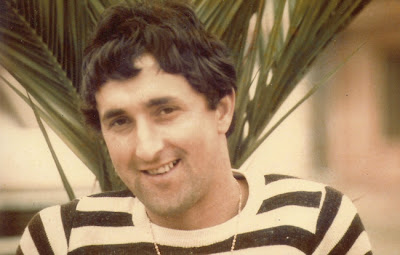 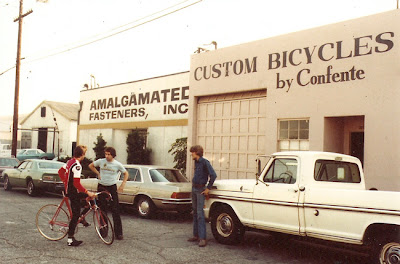 The Confente family sent their season's greetings along with some new images of Mario Confente. The last image I had taken a photo of but this is much better; Mario Confente is in the center with Jim Cunningham of Cyclart to the right. The cyclist on the left is well known but his name escapes me at the moment.
Note: two emails have been sent to me after posting the above regarding the rider on the left as follows:
1. "Looks like it might be Jonathan "Jacques" or "Jock" Boyer?"
2. "The rider is well known with good reason-he was the first American to ride the Tour de France-Jock Boyer. However, the bike here isn't a Confente-it's a Lejeune. Mario was interested in the bike's geometry." submitted by George Hollenberg MD, of http://www.confente.org/
Wikipedia has the following, as of December 24, 2008, about Jonathan "Jacques" or "Jock" Boyer:
"Jonathan "Jacques" or "Jock" Boyer (October 8, 1955, Utah, USA) was a professional bicycle racer who, in 1981, was the first American to participate in the Tour de France. Boyer grew up in Monterey, California and was a member of the Velo Club Monterey there.
Boyer raced as an amateur in Europe from 1973, after joining the ACBB club in the Parisian suburb of Boulogne-Billancourt. The club frequently provided riders for the Peugeot professional team, which had had English-speaking riders since the Briton, Tom Simpson, led it in the 1960s. Boyer, however, turned professional in 1977 for the smaller Lejeune-BP team, sponsored by a Parisian cycle company and an international oil giant. He first competed in the Tour in 1981, when the organiser, Félix Lévitan, encouraged him to wear not his team jersey but a Stars and Stripes design which suggested that he was the American national champion. Many have said that Lévitan, who looked after the financial aspects of the race while his colleague Jacques Goddet managed the sporting side, saw Boyer as a way to attract further American interest and money. Boyer rode the Tour de France five times and finished 12th in 1983........"

Search within my blog for Confente for other entries about Mario Confente.
Posted by Angelo senza la o at 7:13 PM