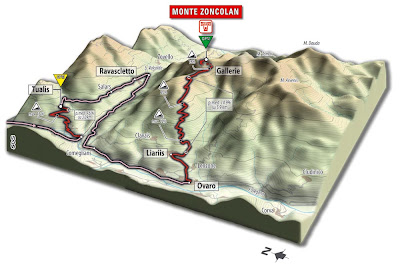 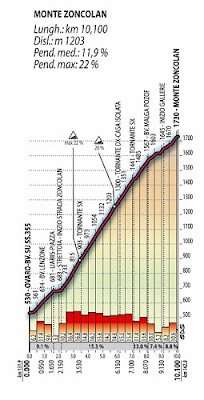 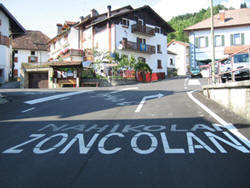 The first guest article is provided by Tobias Panek (owner of Granfondo Cycling Tours, http://www.gftours.com/) and written by Mike Elmer. In Mike's words:

Mt Zoncolon, the slowest climb ever!
Alternate Title: The New “Hardest Climb Ever”

I have done a lot of the biggest climbs in the US, France and Italy: Mt. Ventoux, Alpe d’Huez, Tourmalet, Forclaz, Col d’Izoard, Stelvio, Gavia, Fedai, San Pellegrino, Pordoi, Mortirolo, and Mt. Evans. They are all good climbs, but with proper gearing (34” chain ring, 27” cog), I can get up all of them without bogging down nor extending myself, if I don’t want to. However, they all take a backseat to the new, “hardest climb ever,”: Mt. Zoncolon. 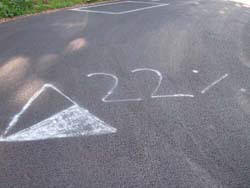 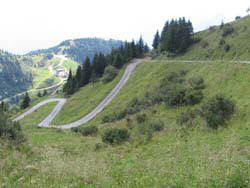 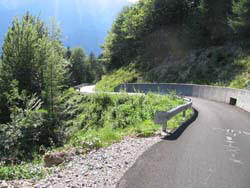 
After what seemed like an eternity, the road finally eased a little. The gears started to turn over smoothly. “What was going on?” We should have studied the profile more closely (I didn’t realize how crucial that would be), because the middle 6.6kms average 15% gradient, but then ‘Z’ actually lessens to 9 and 10%, before the final kilometer. And, the views were absolutely breathtaking! Around a bend, we came upon a tunnel that was wide enough for only a Smartcar to navigate. The tunnel was a blessing, as it was nice and cool. 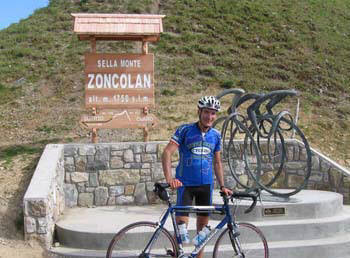 Thanks Mike (above) and Tobias! Stories for the Italian Cycling Journal welcome; contact veronaman@gmail.com
Posted by Angelo senza la o at 4:27 PM