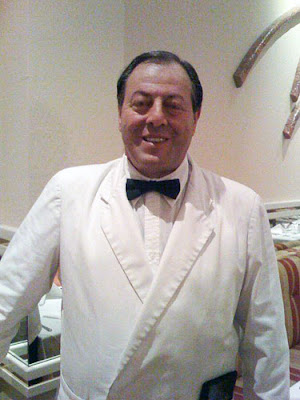 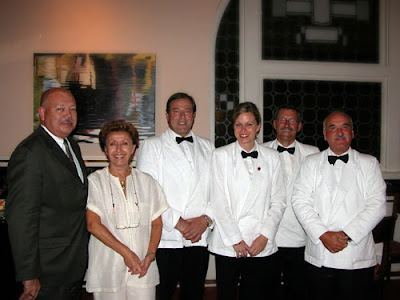 Here Mr. Ciccarelli, originally from San Remo, works as waiter. He reveals that he was a "gregario" (domestique), some 30 Kgs (66 pounds) and 40 years ago, for two seasons in 1969 and 1970 and rode in two Giro D'Italia on the Molteni team with Eddy Merckx.

He tells his stories by beginning with, "In my time....."

"In my time we wore wool jerseys that when rain soaked would drag against the rear wheel which is why we would put the water bottle in the front jersey pocket."

"In my time we would mix five espressos, a little bit of cognac, and a tablespoon of sugar in a glass bottle for psychological boost."

"Do you remember the Savona stage of the Giro when the "Cannibale" (Eddy Merckx) tested positive? In my time I knew him well, he didn't take anything. Remember that in those days if a rider could not get replenishment from the team car they would take a bottles from fans. I believe there was something in one of those bottles."

"In my time they unloaded me from the team after two years, after making promises that were never kept."

"I became a waiter on a ship, fell in love, and disembarked in San Francisco in 1975. Later I came to Sacramento. I'll go back to visit Italy when I am 62 years old."

Concluding his story, Mr. Ciccarelli said, "I will not be going to see the prologue today because it would be too nostalgic."