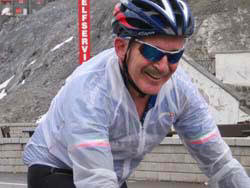 This guest article is written by Glenn Ackerson (above) who participated in a Gran Fondo Cycling Tours (www.gftours.com) bike vacation.
Epic Stelvio

"Look up the word “epic” in the dictionary, and you'll find definitions like "...surpassing the usual or ordinary, particularly in scope or size." Look up Passo Stelvio on the Internet, and you'll find it described as “…the highest paved mountain pass in the Eastern Alps, second only to Col de l'Iseran in the Alps in height.” Put them together, and you have the epic climb that is Passo Stelvio - a climb with more than twice the number of switchbacks (48) as the famous Alpe d' Huez (21.) Add to that the elevation of the summit, 9,048 feet, and you have one of the Italian Alps’ most impressive and challenging climbs. The Stelvio is one of 3 legendary passes of that region featured in the Giro d' Italia, and you're likely to see the racers climbing it next to a bank of snow in the Giro, due to its height.

On our Maratona tour, day 1 began with a bang - a chance to return to the legendary climb. I jumped at the chance to revisit, because where else in the world can you climb a pass of such epic proportions? Stelvio is truly a road that harkens back to the days before automobiles and before the massive tunnels that bore through the Alps on the straight superhighways of today. As we began the climb, I was thankful for the cloud cover, because it kept us cool. And, as the switchback signs began their count backwards on the ascent – 48, 40, 30, 25, 20, a light rain began to fall that I actually didn't mind, because when you're climbing, a light rain doesn't get you that wet. As we neared the summit, I realized that the rain had changed to snow, but it somehow fit perfectly into the epic climb that is the Passo Stelvio. Where else but a pass like the Stelvio would you ride into the snow in July?

As we arrived at the summit, with the anticipation of the traditional visit to the bratwurst stand, this light snowfall grew in intensity and suddenly, leg warmers, arm warmers and my rain jacket weren't cutting it; we were experiencing a true snow squall! The picture you see should have a caption like, "hurry up and take the photo - we're freezing!" 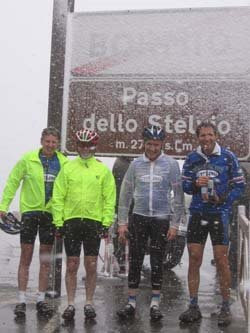 I will admit to doing something after that photo shot and a coffee drink to warm up that I've never done on a tour before - taking a ride back down the mountain in the van. It's a ride like that when you appreciate a tour company with a van always nearby. And, even the brave souls that descended before us on bikes, swearing to get in every last mile, soon jumped in the van, when the reality of the weather and the difficulty in feeling fingers with which to brake set in. The Stelvio, snow and all, didn't disappoint, and on this day, it lived up to its epic reputation." 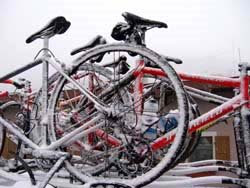 A very good series of photos of the Stelvio climb are in this blog entry: http://italiancyclingjournal.blogspot.com/2009/01/climbing-famous-stelvio.html