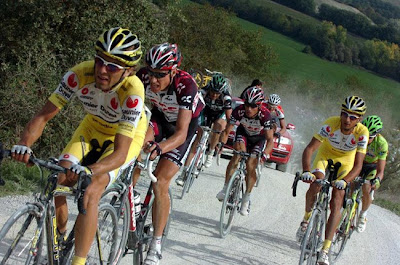 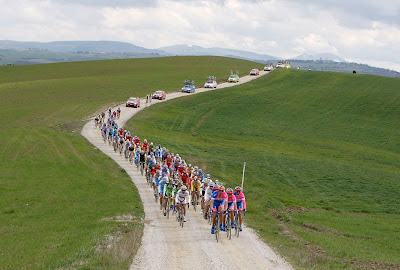 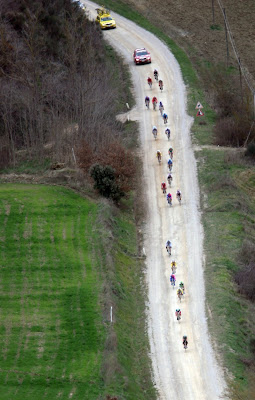 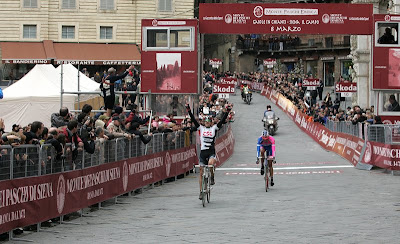 The newly named "Monte Paschi Strade Bianche, Eroica Toscana", previously named "Eroica" is probably the only professional race in Italy that has as its roots in a course and event begun by amateur cyclists at the "L'Eroica" (more about this later on).

The Italians are trying to establish a new one day classic on the professional calendar to rival the traditional Spring classics. To accomplish this Monte Paschi Strade Bianche, Eroica Toscana offers the white gravel and shale roads of Tuscany rather than the cobbles of Paris-Roubaix. Past podium finishers:
2008
1° Fabian Cancellara (Sui)
2° Ballan (Ita)
3° Gerdemann (Ger)
2007
1° Alexandr Kolobnev (Rus
2° Ljungqvist (Swe)
3° Khalilov (Ukr)

The official presentation took place yesterday and the 3rd edition of the event will take place on March 7th. The course will be 190 km in length starting in Gaiole in Chianti and finishing in the piazza del Campo in Sienna. The route will have 8 sections of white roads totalling 57 km of the 190 km route.

The "L'Eroica", first organized in 1997, is an event that relives the heroic age of the "Giants of the Road". Participants ride on vintage racing bicycles wearing the wool jerseys on the "strade bianche" (white roads) which makes it possible to relive the atmosphere of heroic times of cycling. The event evolved through the years and began to allow more modern bikes but now the event has gone back to its roots of vintage-bikes-only format.


The next L'Eroica, for amateur cyclists, will be October 4, 2009. More details at the official website (also in English): http://www.eroica.it/

Photos: Simoni leading in 2007; remaining photos are of the 2008 professional Eroica