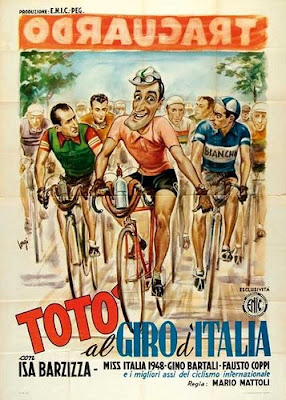 "Totò Al Giro D'Italia" is an Italian comedy filmed in 1948. The story line of the film is that Totò falls in love with the beautiful beauty pageant contestant Doriana. However, she agrees to marry him only if he wins the Giro d'Italia. To do this Totò has to win the Giro against Coppi, Bartali, Schotte, Kubler, Bobet, Magni and others, all of which are actually in the film.

In this portion of the film Totò, wearing the Benotto jersey, presents himself at the start to receive his race number; he is preceeded by Coppi and Bartali. At the registration Coppi is on his left and Bartali to his right. In the racing sequence Coppi, Bartali, Schotte, Kubler, Bobet, and Magni all appear.

Since the film was made in 1948 all the bikes are "period correct". I'm not sure if they are the actual bikes Bartali, Coppi, etc., would normally ride however. Anyone have an opinion?